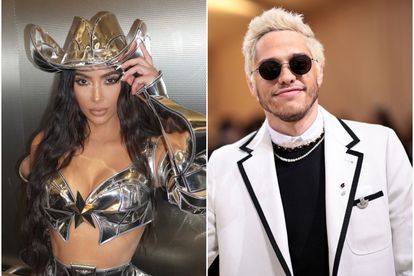 If you’re wondering what Kim Kardashian sees in Pete Davidson, you’re not alone!

She’s beautiful, a certified billionaire and frankly can have any guy she want. So why the scrawny, socially awkward SNL star?

…because everyone really wants to know…

Almost every woman knows that there is something attractive about bad boys, that keep them intrigued and sadly, a sucker for punishment.

For Pete, his potty mouth and long (very long) string of beautiful celebrity exes – including Ariana Grande, Kate Beckinsale, Margaret Qualley, Kaia Gerber and most recently Phoebe Dynevor – could be the thing that excites Kimmy dearest the most.

Oh, and he’s also “well-endowed”, claim his exes. Arianda Grande, who dated the star in 2018, claimed he had “big d*** energy” and even called his manhood “huge”.

Kim Kardashian is fresh out of a seven year marriage to rapper Kanye West. Prior to that she was married to NBA player Kris Humphries.

Depending on who you ask in Hollywood, Pete Davidson is one of the funniest stars of his generation.

And with Kim being an aspiring comedian – as witnessed by her SNL skits – perhaps she appreciates his jokes?

It’s no secret that some women love the attention and affection they get from younger men.

And some young men love the benefits that come with dating mature women; more experience, less games, and of course the fact that they’re well established (and rich).

At 41 years old, Kim is 14 years older than 27-year-old Pete. That classifies her as a cougar!

#5: THE BUZZ AROUND THEIR ‘ROMANCE’

Of course, the pair could just be faking it all for the cameras and as an elaborate PR stunt.

Their “dates” continue to make headlines and that picture if them in the amusement park holding hands, arguably broke the Internet.

Pete has a number of projects up his sleeve, and well Kim needs to secure viewers on her family’s new spin-off reality show with Hulu.

Is it true what they say: The devil works hard, but momager Kris Jenner works harder?