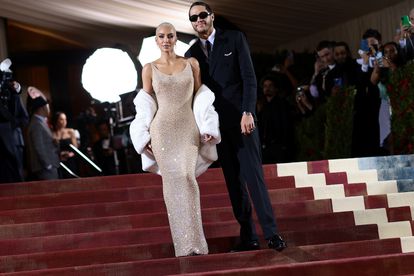 Kim Kardashian and Pete Davidson attend The 2022 Met Gala Celebrating “In America: An Anthology of Fashion” at The Metropolitan Museum of Art on May 02, 2022 in New York City. Image by Dimitrios Kambouris/AFP

Kim Kardashian and Pete Davidson attend The 2022 Met Gala Celebrating “In America: An Anthology of Fashion” at The Metropolitan Museum of Art on May 02, 2022 in New York City. Image by Dimitrios Kambouris/AFP

The woman who penned one of Marilyn Monroe’s most popular biographies has hit out at Kim Kardashian’s decision to wear a dress of the screen legend to the Met Gala this week.

The reality TV star surprised guests of the prestigious gala after she arrived on the red carpet wearing a gold gown worn by the actress 60 years ago.

Marilyn Monroe wore the iconic dress to the birthday party of John F Kenny in Madison Square Garden on 19 May 1962, where she infamously performed “Happy Birthday Mr. President”.

‘ANYTHING COULD HAVE HAPPENED TO IT’

Michelle Morgan, author of the 2018 book The Girl: Marilyn Monroe, The Seven Year Itch, and the Birth of an Unlikely Feminist revealed her concerns after Kim Kardashian wore the dress to the Met Gala.

She told New York Post: “I am extremely disappointed to see this 60-year-old, iconic dress being worn in public.

“The gown is extremely fragile and has been previously kept in temperature-controlled conditions. It is, not only being worn but also in a red carpet environment, where anything could have happened to it.

Morgan added that “sweat, perfume and makeup” could have caused “untold damage and staining” to the dress.

The dress – designed by Jean Louis – was loaned to Kim by the Ripley’s Believe It or Not! Museum in Florida, which previously paid $5 million for it in an auction.

Nina Boski, producer of the Marilyn: Behind the Icon TV docuseries and podcast also spoke out.

She added to the publication “I can understand why Kim would want to wear the dress for publicity purposes; however, the dress should have only been worn by one person, and that is the iconic Marilyn Monroe”.

Less than three months after wearing the dress, Marilyn Monroe died of a suspected overdose on 4 August 1962.

Despite concerns about the condition of the dress, representatives for Ripley’s claim Kim Kardashian “has continued to show the utmost respect for this opportunity and historic garment”.

They added in a statement: “From extensive research to following guidelines such as nobody makeup, only wearing the dress for the short red-carpet appearance, and making absolutely no alterations, she has become a steward and added to its history.”

Ripley’s also revealed that they had gifted Kim with a lock of Marilyn Monroe’s hair ahead of the Met Gala.

In a video clip, Kim is seen squealing in delight after receiving the gift – and vowing to use “voodoo” on it.

She said: “Oh my God, I’m literally going to do some crazy voodoo s**t [to] channel her. This is so special to me. Thank you so much. This is so cool. Wow, this is sleeping with me every night.”

Meanwhile, the Marilyn Monroe dress has been returned to “Ripley’s Vault, a dark, temperature and humidity controlled room, where it remains in its case, mounted on a form covered in acid-free cotton muslin”.