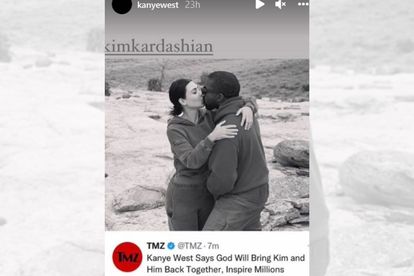 Kanye West is doing everything in his power to convince estranged wife Kim Kardashian to give their marriage a second shot.

However tweeps are not convinced at his public plan to win his wife back.

In fact, some have even labelled it “emotional abuse” and have claimed that the rapper is “manipulating” his ex through the public arena.

Kanye West made headlines over the weekend after posting a screenshot of a TMZ story about him wanting to reconcile with his estranged wife.

But whilst that seemed odd enough, Kanye tagged Kim Kardashian in on the Instagram Story.

TMZ reported that Kanye posted a lengthy Thanksgiving prayer on his Instagram feed. In the five minute video, Ye admitted that he had “wronged” his wife with his actions.

He said: “Good Lord, my wife did not like me wearing the red [MAGA] hat. Being a good wife, she just wanted to protect me and our family. I made me and our family a target by not aligning with Hollywood’s political stance, and that was hard for our marriage.”

Kanye’s prayer comes a day after he delivered not only hot meals to homeless people on Skid Row, but an impromptu speech about his marriage.

Ye also revealed that God would “help” reunite with his wife and family. He was heard saying; “If the enemy can separate Kimye, there’s going to be millions of families that feel like that separation is ok.

“But when God brings Kimye together, there’s going to be millions of families that are going to be influenced to see that they can overcome the work of the separation, of trauma the devil has used to capitalize to keep people in misery while people step over homeless people to go to the Gucci store.”

Kanye’s IG Story had mixed reactions from his the public. Whilst some admired him for trying to make amends, others thought his actions were “toxic” and “manipulative”.

One tweep posted: “While Kanye’s post is entertainingly messy, I’d like to remind y’all that he’s openly manipulating and antagonizing Kim after she got a new partner — this is often the most dangerous time for abusive/toxic exes”.

“Kim Kardashian deserves to be happy as well”

“Kanye is the definition of a toxic man. He sees Kim happy with someone else and now wants to stop acting a fool.”

“Kanye is toxic af. He done publicly dated a few women in the midst of this divorce and now Kim is seen smiling and kicking it with someone new and he’s like “God will bring us back together to inspire millions”

KIM SPOTTED ON ANOTHER DATE WITH PETE DAVIDSON

However Kanye’s pleas to beg for mercy have fallen on deaf ears when it comes to Kim Kardashian.

The mom-of-four was seen out on yet another date with her young lover Pete Davidson.

The pair were pictured having breakfast at a Beverly Hills hotel. One witness even claims they couple looked “in love”.

Dutch music journalist Paul Barewijk who bumped into the couple during their meal, told People: “They looked happy, sat close to each other and walked away together. It looked like a date to me”.