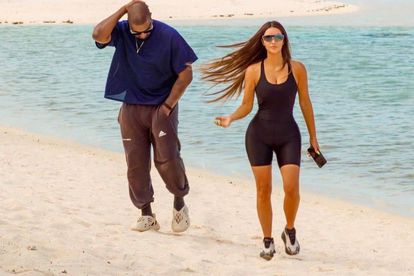 American rapper Kanye West has been doing everything in his power to make his estranged wife Kim Kardashian and her new boyfriend Pete Davidson feel uncomfortable. The rapper recently headed to Instagram to share screenshots of their recent texts – and judging by Kim’s response, she is not happy.

The reality TV star questioned why he was posting their private conversations while adding that he is creating a scary and dangerous environment for her new love, Pete.

Kim Kardashian is seemingly at her wits end with her estranged husband, Kanye “Ye” West.

The Jesus Walks artist has been going out of his way to declare his love for the Keeping Up With the Kardashians star and even sent her a truck full of roses for Valentine’s Day this year.

44-year-old Kanye has also taken to sharing screenshots of their private conversations on his Instagram -and judging by Kim’s response, she is far from impressed.

In one screenshot, Kim asks Kanye why he keeps sharing their private messages online and he responds:

“Cause I got a text from my favorite person in the world. I’m your number one fan … Why wouldn’t I tell everyone!!!!”

The 41-year-old also asked her husband to stop “creating a scary and dangerous environment” for her boyfriend Pete with his erratic social media behaviour.

According to Kim, “there are dangerous people out there and this is scary and it doesn’t have to be”. Kanye responded by asking his fans not to do anything to Pete because he will handle it himself.

“UPON MY WIFE’S REQUEST PLEASE NOBODY DO ANYTHING PHYSICAL TO SKETE IM GOING TO HANDLE THE SITUATION MYSELF.”

ALSO READ: Kim K’s friends urge her to ‘go for it’ with Pete Davidson