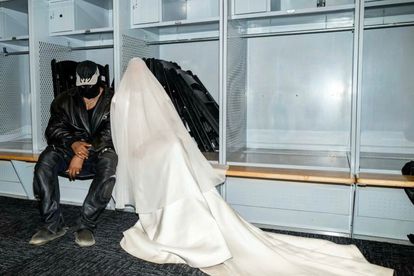 Despite being officially separated from her estranged husband Kanye West, she’s still done the most to appear as his number one fan.

Heck, she even turned up to his album launch wearing a wedding dress!

And now she is giving his album a thumbs up on social media…or has she?

‘NOT KIM KARDASHIAN LISTENING TO DONDA ON MUTE’

Over the weekend Kim revealed on her Instagram Stories that she was currently listening and vibing to several tracks off the Donda album.

But eagle-eyed fans spotted a big red flag – the reality star’s volume was set to the lowest possible level, shattering her façade of the “friendly ex”.

“Not Kim Kardashian listening to Donda on mute,” tweeted one fan.

Meanwhile Van Jones – who has been rumoured to be the new man in Kim Kardashian’s life – is speaking out on the “absurd” allegations.

The CNN presenter has been linked to the businesswoman by insiders who claim he is mentoring her during her law studies.

Speaking to Page Six, he said: “I never made any comments about the rumors of me and Kim Kardashian dating as I found it absurd.

According to reports, Kim is also rumoured to be open to reconciling with Ye, who is “trying to win her over again.”

A source told Entertainment Tonight: “Kanye wants to get back with Kim and he has been trying to win her over again and reprove himself. Kim and Kanye have a deep love for each other and many amazing memories and it’s difficult to just let that all go.

“Kim’s main focus and concern are her children and doing what is best for them and their family. She is open to seeing where things go with Kanye and to see if they can work through their issues as a couple,” they continued.