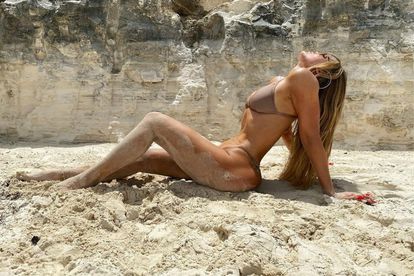 Khloe Kardashian and Photoshop have often been placed in the same sentence, and it’s all to do with the seemingly heavily-edited pictures she posts on social media

The reality TV star and mom has been called out by fans many a time for not just editing her images, but making them look totally unrealistic too…

KHLOE KARDASHIAN: STOMACH IN, CHEST OUT

Khloe Kardashian has long documented her fitness journey with fans and even helmed the show Revenge Body.

But do her pics of her tiny waist, peachy posterior and changing face have anything to do with weight loss or work done by a plastic surgeon and editing app?

Fans think it’s the latter, after she posted a serious of snaps on her social media this week that had the timeline talking.

In the first set, Khloe poses in a snug printed bodysuit showing off all her curves. But it was a black and white image of her outstretched arms that had everyone talking, and doubting it was real

“With arms like that, you should be 7 feet tall. Even OJ ain’t that tall. Stop the photoshopping of impossible proportions,” commented one tweep.

Sus fans even pointed to a pillar in the background which they claimed was “warped” from Photoshop in another pic.

The second batch of snaps posted a day later, featured True’s mom sunbathing in a bronze bikini, showing off her super-skinny waist.

“Stop photoshopping! The number of mental health problems, eating disorders and deaths because of these have risen dramatically!”, one irate fan commented.

Another added: “The pic where she’s sucking her tummy so much that she could take a s***…like gurrl let that tummy out it’s not that serious bruh”.

Also read: ‘This is why I don’t date women’: Ntando jokingly photoshops Lasizwe

Whilst all eyes were on Khloe Kardashian’s alleged Photoshop, she attempted to deflect the spotlight on another member of the family and their disastrous fashion fails.

Khloe threw shade in the direction of sister Kim Kardashian by reposting a meme mocking her fake tan over the years on her Instagram Story. If that wasn’t shady enough, she even tagged Kim in too!

It’s not the first time Kim’s dodgy tans have been the butt of Kardashian jokes, Kourtney also mocked her sister after she encouraged her to get one for a photoshoot.

“But what if I get one and I look orange like Kim does?” she hesitantly told the camera on the family’s series Keeping Up With The Kardashians.