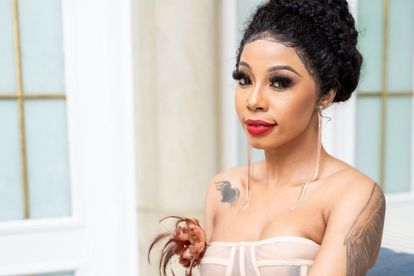 Yesterday, millions of people across the world spent billions of rands on chocolates, roses, and other romantic gifts in celebration of Valentine’s Day. One person who seemingly couldn’t be bothered with the day’s drama is South African musician, Kelly Khumalo. The singer headed online yesterday to use her Russian alter ego to slam couple’s who she says are “celebrating nonsense.”

Valentine’s Day has been around for eons and people all over have grown accustomed to making the most out of the day of love. Not everyone thinks it is worth all of the spending and planning that goes into it and have slammed the day as an elaborate money-making scheme.

Kelly Khumalo is evidently one of those people.

The 37-year-old singer took to her Instagram page to share another hilarious video of her Russian alter-ego Babara slamming Valentine’s Day as nonsense.

According to Kelly, couples waste their time and money just to show off on social media when they don’t actually have ‘Godly’ relationships that are worth celebrating.

“During this foolishness, 90% of us are celebrating nonsense because we just want to seem useful on this day on social media but literally none of us have the Godly kind of relationship.

We are basically chasing the wind and singing an empty song of Valentine’s,” says Kelly aka Babara in the clip.

What does SA think?

Many people took to Kelly’s comment section where they shared their thoughts on the Empini singer’s video and opinion on Valentine’s Day.

“This Is Why I Love You. You Saying Things With No Filter.”