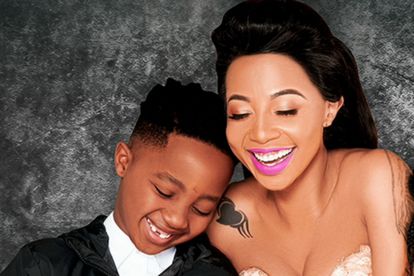 Kelly Khumalo has dedicated a birthday post to her son Christian.
Image via Showmax
Life with Kelly Khumalo

Kelly Khumalo has dedicated a birthday post to her son Christian.
Image via Showmax
Life with Kelly Khumalo

After weeks of report after report attacking her personal life, Kelly Khumalo is celebrating a happy occasion: the birthday of her son Christian.

The singer shares the 12-year-old with her ex-boyfriend Jub Jub.

Taking to Instagram, Kelly Khumalo posted a picture of her son, who fans claim is his father’s “double”.

She also shared a clip of the boy, in which she teased they would be celebrating his birthday with a “big party”.

Kelly shared an endearing caption dedicated to the preteen. She wrote: “I will carry you on my back until you are strong, wise, and old enough to fly on your own, I promise to fight and block everything that stands in the way of you becoming everything that God has designed you to be”.

Kelly also told the boy that he was sure to “make mistakes along the way” in growing up.

She continued: “You will fall, and make mistakes along the way but that’s part of growing up, as long as you learn and continuously fight to be a better person, that’s good enough for me. I got you son and I love you to the moon and back. Happy Birthday”.

Whilst Jub Jub has yet to wish his son a happy birthday on social media, he has deleted a post from the occasion last year.

Following Christian’s birthday in May 2021, the Moja Love presenter shared a pic of him, posting in the caption: “Happy birthday my boy, in this life I want nothing but the best for you… you growing up so fast and I can’t wait to wrap my arms around you. I LOVE YOU SO MUCH”.

Last week, Jub Jub – who publicly apologised to Kelly Khumalo in February for claiming she “bewitched” him with “muti” – praised his baby mama.

In a Mother’s Day post, he shared: “Despite our differences, I would like to wish the woman who carried and brought my son into this world a Happy Mother’s Day”.