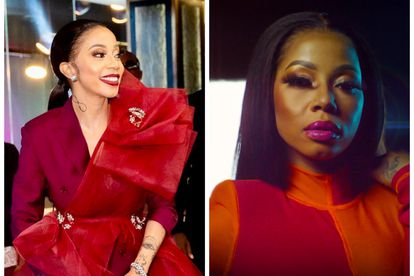 Kelly Khumalo has revealed her life has been threatened amid the season 3 premiere of Showmax reality show ‘Life with Kelly Khumalo’.
Image via Twitter
@kellykhumaloza

Kelly Khumalo has revealed her life has been threatened amid the season 3 premiere of Showmax reality show ‘Life with Kelly Khumalo’.
Image via Twitter
@kellykhumaloza

The third season of Life With Kelly Khumalo officially kicks off today – Tuesday 5 July – but the singer has revealed its not all fun and games.

The woman many South Africans have accused of having played a role in the murder of soccer star Senzo Meyiwa has revealed that she has also suffered death threats.

The former Orlando Pirates goalkeeper and Bafana Bafana captain was shot and killed on 26 October 2014 while paying a visit at the home of Kelly Khumalo’s mother in Vosloorus. Kelly and the six other people who were in the house at the time, claim that Senzo was killed in a robbery gone wrong.

Speaking to eNCA, Kelly Khumalo revealed that she and her family have been threatened after being a public target.

She also claimed that the law had let her down in offering her protection.

“I think the lowest point for me is being let down by the law. As a South African citizen, I trust and believe in the law to protect not just me but my family and our society. But with what has happened to me, I have had my life threatened and family threatened, not once but multiple times. And I feel like the law is not coming into place to protect and make me feel like that it is within my right to have protection for myself and my family.

Kelly Khumalo is also waiting for her “day in court” and for “justice” to be served for Senzo.

She added: ”We have a problem in our country and this is not just about Kelly Khumalo, the musician. This is about an individual in the pits and darkest place of wherever it is, where they lose loved ones and justice is not served.

“I once said something about this [lack of justice] on my Instagram page. To my surprise, I had a lot of people saying they support and agree with what I am saying because they are some of the South African citizens who have been robbed of justice in this country because for some reason the law is not playing the part it is supposed to play. That is what every South African is going through.”

Meanwhile, Twitter users have continued to call for the country to boycott the Showmax show Life With Kelly Khumalo. They also music promoters to stop booking the singer.

Here’s what a few tweeps had to say:

@Sonofth13643564: “No Orlando Pirates supporter must buy Kelly Khumalo album. I don’t care whether it has church song Tsek”

@Jongilizwe5: “Not Kelly Khumalo using the miscarriage of justice to the Meyiwa family to promote her reality show. A whole potential suspect using the same case for publicity and financial gain”

@KayMosoeunyane: “Kelly Khumalo just pulled a publicity stunt for people to watch her show that airs tomorrow on Showmax… Well her marketing team probably told her to say something so she can be the talk of the town again… Annoying”

@justbongza: “The more we boycott Kelly Khumalo the more she runs out of cash. And the more she won’t afford those attorneys”

No Orlando Pirates supporter must buy Kelly Khumalo album. I don’t care whether it has church song Tsek pic.twitter.com/ynNdkHnHWE

Not Kelly Khumalo using the ongoing delay and miscarriage of justice to the Meyiwa family to promote her new Showmax reality show, a whole potential suspect using the same case for publicity and financial gain 🤔 pic.twitter.com/Bz3WNVmRyu