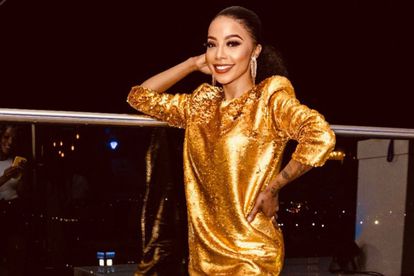 Kelly Khumalo is living her life unfazed by all the drama surrounding her – including the murder trial relating to the death of her boyfriend Senzo Meyiwa, and a hot Netflix documentary reflecting the events thereafter

In fact, the mom-of-two has unapologetically claimed – in her own words – that she is “untouchable”

Kelly has been the subject of much speculation following the death of Senzo Meyiwa in 2014. Netflix documentary Senzo: Murder of a soccer star has also thrust her back into the spotlight as a possible suspect behind the shooting that killed the Bafana Bafana coach.

‘TOUCH NOT THE ANOINTED’

In an Instagram post on Tuesday 12 April, Kelly Khumalo posted a picture of herself by an entourage.

The singer appeared to be going through an airport terminal in the pics. This, after performing at the wedding of socialite Felistas Murata – known as Mai Titi – and her businessman husband Tinashe Maphosa in Zimbabwe over the weekend.

“Touch not the anointed”, she captioned the image.

In recent days, Kelly Khumalo has also revealed that “God’s favour” is upon her. “No weapon formed against me shall prosper”, she captioned a motivational post.

She added in the accompanying clip: “Those who are bewitching us, they may as well give up. Because they are not going to win.

“You are going to fail. I am not the one to play with”.

Meanwhile Kelly Khumalo’s advocate Magdalene Moonsamy revealed that the singer may be called to testify in the murder trial against five men accused of killing Senzo Meyiwa.

She told eNCA: “That is something we will wait for the prosecution but indeed, seeing that she was in the house at the time. I am certain that that would be the process that would follow”.

Kelly was one of several in the home in which the much-loved goalkeeper died. Others included her sister, Zandi and their mother Ntombi Khumalo. Zandi’s then-boyfriend Longwe Twala and Senzo Meyiwa’s friends Mthokozisi Thwala and Tumelo Madlala were also there. Also in the home at the time was Kelly’s small children Christian and Thingo; her daughter with Senzo.

The five men are accused of undertaking a hit against Senzo, who succumbed to gunshot injuries sustained in the Vosloroos house of Kelly’s mother.