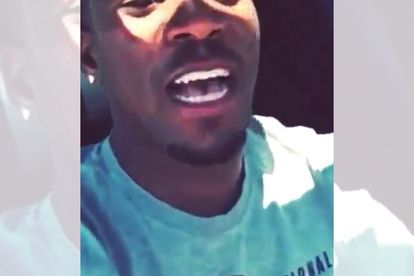 Not for the first time, Kelly Khumalo has been accused of using her music to send cryptic clues about her alleged involvement in the death of her boyfriend Senzo Meyiwa.

The singer has found herself at the centre of another scandal after she was named as the person allegedly responsible for her boyfriend’s 2014 death.

The bold claim was made by defence advocate Dan Teffo amid the ongoing murder trial at the Pretoria High Court.

Senzo was shot and killed on 26 October 2014 in the Vosloorus home of Kelly’s mother. Kelly and five other adults have maintained claims that the soccer star was gunned down in a botched robbery

But do Kelly Khumalo’s songs tell a different story?

In a clip which remerged amid the murder trial, Senzo Meyiwa is seen singing along to the song Asine, made famous by girlfriend Kelly Khumalo

The song was released in August – just two months before the Bafana Bafana goalkeeper was shot and killed.

Following the death of Senzo, fans began to speculate on the meaning behind the lyrics of Asine, which talks of a woman who is accused of murdering her husband. During the murder trial of her spouse, the woman repeatedly maintains her innocence.

According to reports, just five days before this death, Kelly Khumalo recorded him singing the song in his car.

Asinine is not the only questionable song from Kelly Khumalo.

Ngwathwala Ngaye  – the singer’s 2020 hit track – has been raising eyebrows over its meaning. The song translates to the English meaning: “I made a sacrifice with him”.

Kelly Khumalo is also recording her “December hit” called Bazokhuluma – which means “They must talk”.