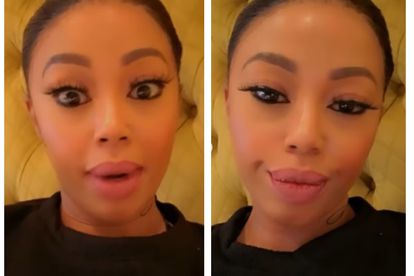 Kelly Khumalo has shared a ‘message from God’ with her fans amida shock decision made in the Senzo Meyiwa murder case.
Image via Instagram
@kellykhumaloza

Kelly Khumalo has shared a ‘message from God’ with her fans amida shock decision made in the Senzo Meyiwa murder case.
Image via Instagram
@kellykhumaloza

Hot on the heels of Advocate Teffo withdrawing from the Senzo Meyiwa murder case, and with it any reason to pursue Kelly Khumalo, the singer has spoken out about receiving a “message” from God.

The reality TV star took to her Instagram account to share a warning with her followers following a series of incidents which has taken place in South Africa and the world.

In the clip, Kelly Khumalo revealed that a “power” that had “consumed” her, was using her as a vessel to share a divine message and warning.

The star – who has two children with baby daddies Jub Jub and the late Senzo Meyiwa – has previously claimed to have a “spiritual gift”.

In her message, Kelly Khumalo referenced a number of current affairs including inflation, petrol price increases, loadshedding, gender-based violence, tavern deaths, recent floods in KwaZulu-Natal, and the outbreak of monkeypox. She also claimed that political leaders, pharmaceutical companies, lying and cheating husbands and wives, and “snakes” amongst us would be taken down.

She added: “This change is coming and it’s drastic….If you need to pray or prepare yourselves….it’s up to God.

“It’s up to you whether you want to listen to me or not…If this is not a warning, I don’t know what its….wake up!”.

She shared in the caption: “This is not just about South Africa but the whole world…anything and everything that is unGodly will perish.  May our God cover us through this drastic change. Those who must step down must do it now before they are wiped out!”.

ALSO READ: ‘I don’t have time for rubbish’: Kelly reacting to Senzo or Jub Jub drama?

Many tweeps voiced their opinions on how the singer was to blame for what had played out in the courtroom. They’ve also accused the star f having something to do with Meyiwa’s death in 2014.

But Kelly Khumalo took to her Instagram Stories to shut down criticism towards her. Posting several motivational messages, Kelly claimed that “God’s got me”.

Kelly Khumalo’s words come after she claimed she was “spiritually untouchable” in her Showmax reality TV show. This followed her reference to a claim made by Senzo Meyiwa’s mother in the Netflix documentary about the soccer player, in which she claimed she had visited a sangoma in a bid to “get rid of” Kelly Khumalo.