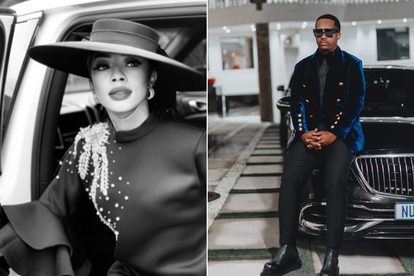 Peeps say if Andile Mpisane gets cancelled, Kelly Khumalo should be cancelled too. Images via Twitter/Instagram: @kellykhumalo/@andilempisane

Peeps say if Andile Mpisane gets cancelled, Kelly Khumalo should be cancelled too. Images via Twitter/Instagram: @kellykhumalo/@andilempisane

On Tuesday night this week, influencer and DJ Sithelo Shozi shocked social media users after alleging that she suffered abuse at the hands of her former boyfriend and children’s father Andile Mpisane. Heading to Instagram, Shozi shared snaps of her bruised face and recordings from conversations with Mpisane in which he is heard threatening her life. The former celebrity couple has been trending on Twitter ever since as South Africans discuss gender-based violence.

Many of them have also brought up cancel culture and demanded that Mpisane be cancelled the same way many other abuse-accused celebs were cancelled.

Ever since Sithelo Shozi accused Royal AM chairman Andile Mpisane of abuse, he has been trending on various social media platforms.

The 21-year-old son of KwaZulu-Natal businesswoman Shauwn “MaMkhize” Mkhize broke up with Sithelo in December last year and shocked his fans when he married Tamia Louw who gave birth to their child Miaandy shortly after their impromptu union.

The endless scandals have resulted in many locals wondering whether or not he should be “cancelled” – especially after he is being accused of woman abuse.

Taking to Twitter shortly after Shozi levelled the claims against him, one tweep, @lejaka1 called on cancel culture to hit back against Mpisane since it affected other local celebs such as Sjava, MacG and local rapper Brickz.

“The same energy that was used to cancel MacG, Sjava and Bricks should be the same for Andile Mpisane! Sithelo did well for recording that bastard because we wouldn’t even believe her!” he wrote.

His thoughts were echoed by a different Twitter user with the handle @justaguy66:

“Andile is a whole Chairman of a team in the DStv Premiership but y’all won’t CANCEL him because it’s your “faves” son. Had it been MacG saying those words to a Sithelo, y’all would be making sure #PodcastAndChill doesn’t exist.”

No career to cancel?

While many people seemed to agree with the tweeps, others said that Andile does not have even going on for himself to be cancelled.

According to them, his musical career has not taken off and neither has his soccer career.

Many believe that without his mother’s money, he wouldn’t be relevant at all and remarked that there’s simply nothing that can be done about the fact that he’s popular because he is rich.

One person remarked that since Kelly Khumalo hasn’t been cancelled, it would be unfair to cancel him.