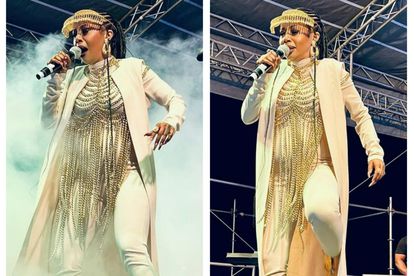 Sources close to singer-songwriter Kelly Khumalo claim that the Empini hitmaker is expecting her third child. According to Zimoja, the singer’s latest baby daddy is rumoured to be former Kaizer Chiefs midfielder and boyfriend of three years Mthokozisi Vincent Yende.

Kelly had her first child with Uyajola 9/9 presenter Jub Jub and her second with the murdered Bafana Bafana captain Senzo Meyiwa.

‘KELLY HAS BEEN MOODY’

An anonymous friend of the 36-year-old star told the publication that Kelly has been very moody as of late and as a result their friendship has been suffering.

“She has been dating her footballer for some time now. But I don’t know If they are still seeing each other because we have not spoken for a while because she has been very moody. Our friendship has been on and off but I know we will be okay soon. Well, as soon as she gives birth, I know things will be okay,” the friend said.

Another friend also confirmed to the publication that Kelly has entered her second trimester.

“She’s approaching five months now. She doesn’t want to give us the exact dates. But Kelly loves kids. She looks good and she’s happy to be with a man that loves her,” she said.

The mother of two’s manager, Boniswa Meslane, said she does not think that Kelly is pregnant. She however said that she would find out whether the singer was pregnant.

“I haven’t been working directly with Kelly for some time, so I wouldn’t know. I don’t think she’s pregnant… I can definitely find out though. I also see nothing in the pictures she posted. Her stomach looks normal,” Meslane said.