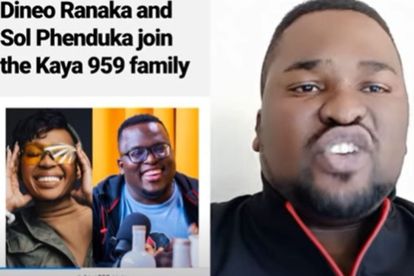 Never one to hold back, Slik Talk has given Dineo Ranaka a tongue-lashing over her treatment of her Kaya FM co-host Sol Phenduka.

The celebrity YouTuber took aim at the breakfast show presenter whose behaviour towards her colleague has courted controversy.

Taking to his popular YouTube show, Slik Talk put Dineo Ranaka on blast for her treatment of her co-host.

He said: “My boy was being treated like a toddler, disrespect all the way by Dineo Ranaka. Sol Phenduka cannot talk, he cannot ask a question, he has to raise his hand”.

He continued: “Dineo Ranaka let me give you a reality check. We all know that you have three baby daddies, and we’re not going to hold it against you. But Sol Phenduka is not baby or baby daddy number four.

“If three men couldn’t deal with Dineo Ranaka, who the hell is Sol?

“You ought to treat that man with respect because he is your co-worker, not your sidekick. He’s not your buddy, he’s not your pal, he is there to work. It’s 50/50.

“Who the hell are you Dineo Ranka? What have you done that is so amazing that we have to listen to you talk for three hours every day?”

IS THIS WHY SHE ‘LOATHES’ SOL PHENDUKA?

Slik Talk then revealed the reason he believed that Dineo allegedly bore animosity toward Sol.

He continued: “It’s not the Dineo Ranaka breakfast show. Both of you were called by Kaya FM and I can tell that they didn’t do their homework.

“Because Dineo Ranaka is the same person that tried to get Sol Phenduka fired on Podcast and Chill. Dineo put in a phone call to MacG and said he needs to get rid of Sol Phenduka. That means she feels threatened.

Slik Talk also claimed that Dineo and Sol’s personalities do not gel well together – a claim many tweeps have stated.

He added: “She doesn’t like his type of humour. She’s a bully, aggressive, and in your face

“Sol is more like a friend who enjoys camaraderie whereas Dineo Ranaka likes to debate, argue, and have the last word. That is why she is mistreating this guy, making his life a living hell”.