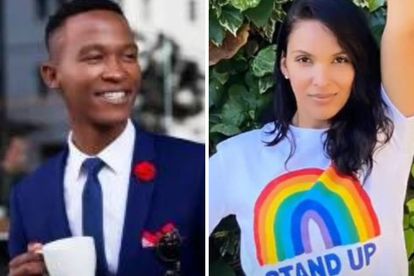 Monique Muller, the ex-girlfriend who accused Katlego Maboe of domestic abuse, cheating, and giving her a sexually transmitted infection (STI), has seemingly snubbed commentary surrounding his return to the Expresso Morning Show.

On Monday morning, the media personality trended on social media following his highly-anticipated TV comeback following a two-year hiatus. The star took a break from the talk show after his personal life was thrust into the limelight in 2020.

Katlego Maboe sat down with co-presenter Graeme Richards for an emotional heart-to-heart on his experience. He also received a warm welcome from the public.

Hours after Katlego Maboe’s appearance on the Expresso Morning Show, Monique Muller took to her own Instagram account to call out another star: Johnny Depp.

In June, the GBV activist clapped back at comments from the actor’s fans, after she was criticised for sharing her opinion on his defamation trial against ex-wife Amber Heard.

At the time, Monique shared an IG post from the account @BeBadass.in about the trial. In it, the writers questioned the narrative being played out in the media concerning the actors.

The Women For Change volunteer added that she expressed her own opinion as she was “skeptical” of the media’s reporting.  She also added that her opinion had been formed “from experience”.

She posted: “It’s actually pathetic how facts don’t matter. The whole media thing is BS. I have a right to my opinion”.

But following the latest news – shocking details emanating from previously sealed court documents from Depp’s lawsuit against Heard – Monique has clapped back once again. She posted on her IG Stories: “I will not say ‘I told you so’. But I hope this opens up everyone’s eyes and minds to the fact that you do not know the full story. Just because you saw the manipulated version Johnny Depp’s team wanted you to see.

“Instead of spreading hate, put all that energy into fighting GBV. Something that actually involves and affects all of us as South Africans”.

She said in a separate post, seemingly snubbing her own ex Katlego Maboe after local courts sided in his favour earlier this year: “That is the wonderful thing about time. The truth always prevails”.

Last week, US court released thousands of pages of previously sealed documents from Johnny Depp’s lawsuit to the public .

And the details are cringe-worthy. In it, the actor’s legal team kept over 6000 pages of material they initially planned to present to the court, but were ultimately blocked, including:

ALSO READ: ‘Thank you for holding me up’: Katlego Maboe says he’s a new man [watch]

The legal documents come two months after a jury found Heard guilty of intentionally and maliciously defaming Depp when she wrote a 2018 Washington Post op-ed identifying herself as a “public figure representing domestic abuse”.