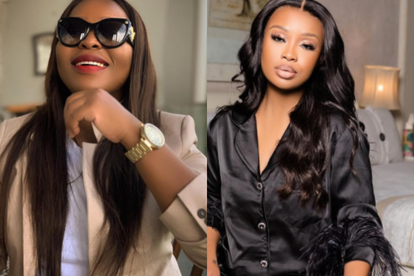 Sithelo is getting a lot of shade online. Images via Instagram: @uyathandeka/@sitheloshozi

Sithelo is getting a lot of shade online. Images via Instagram: @uyathandeka/@sitheloshozi

Sithelo Shozi, Shauwn Mkhize, Tamia Louw, and Andile Mpisane have been trending on Twitter. This after Andile wed model Tamia. Locals have been buzzing about the wedding and discussing how Sithelo must be feeling.

And now it appears that the woman, whose marriage was allegedly wrecked by Sithelo, has headed online to throw some shade of her own.

Over the last few days, many people have been discussing Sithelo Shozi and Andile Mpisane’s relationship.

As a result, people feel bad for the young mom of three, not everyone has sympathy for her. One person who appears to be unphased by Sithelo’s pain is Thandeka Sibiya. She is the woman who was allegedly married to Sithelo’s eldest child’s father.

Zalebs reports that Thandeka’s husband allegedly cheated on her with Sithelo all those years ago.

And after the drama unfolded, Thandeka headed to Instagram to throw a little shade the DJ’s way by flaunting her current happiness and content.

“ya sanbona,” she captioned an Instagram post which translates to “yes, hello,” something that can be considered very mocking.

Many of Thendeka’s friend’s quickly headed to the comment section to share their thoughts on Sithelo’s alleged betrayal. A lot of them said that it was karma coming back to bite Sithelo in the butt.

“Thandeka, I waited 5 years for your vindication. INkosi iqhubeke ikubusise.”