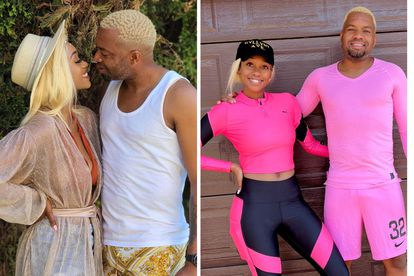 Kaizer Chiefs goalkeeper Itumeleng Khune may have a ton of critics condemning his career moves, but he has the prettiest cheerleader in his corner – his wife Sphelele Makhunga.

The soccer star married the model and influencer in a low-key wedding in 2019. In June, the couple celebrated their nuptials with a lavish traditional ceremony.

KHUNE GUSHES OVER HIS WIFE

Despite criticism of his lack of play as Kaizer Chiefs’ goalkeeper, Khune’s wife Sphelele has continued to support her husband through the highs and lows of his career.

In fact, she’s even named herself the official “number one cheerleader”. The soccer WAG is often spotted in the Naturena stadium stands, where she claims she brings the team – and hubby – “good luck”.

On social media, the fashionable spouse often posts messages of encouragement to her husband and his team.

And it hasn’t gone unnoticed by Khune.

Reply to a post of her attending her “first away game” alongside the team, Khune tweeted: “Thank you for always being there when we need you the most wifey”.

Sphelele doesn’t just make her husband feel good on the soccer pitch, but off it too.

“Feeling young again”, the 35-year-old tweeted of his hair makeover. To which Sphelele replied:  “That’s my hubby y’all, and yes I did that”