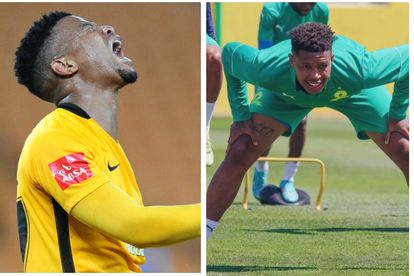 Former Kaizer Chiefs and Sundowns player George Lebese and his wife were reportedly in a fight that resulted in protection orders being filed. Images via BackPagePix, @bonganizungu08/Twitter

Former Kaizer Chiefs and Sundowns player George Lebese and his wife were reportedly in a fight that resulted in protection orders being filed. Images via BackPagePix, @bonganizungu08/Twitter

Former Kaizer Chiefs and Mamelodi Sundowns midfielder George Lebese has responded to allegations he was in a physical fight with his wife, Mapaseka “Melba” Nkosi after she allegedly kissed current Masandawana player, Bongani Zungu.

According to Sunday World, Lebese – who is currently without a club after he departed MLS team Colorado Springs Switchbacks – had the brawl outside a nightclub in Rosebank, Johannesburg, on Monday this week.

GEORGE LEBESE INVOLVED IN A BRAWL WITH HIS WIFE

A source, who was only identified as a police officer, said an argument broke out when George Lebese accused his wife of kissing the former SC Amiens player.

Zungu is reportedly currently dating former The Queen actress Cindy Mahlangu and the pair welcomed their first child together this year.

The publication reports that there were patrons who witnessed the alcohol-fuelled fight and decided to call the police to intervene when it got out of control.

Lebese and Nkosi were reportedly taken to the Rosebank Police Station where they refused to press charges against each other.

However, police registered their brawl in the gender-based violence (GBV) book and advised them to obtain protection orders against each other.

According to Rosebank police spokesperson Bongi Mdletshe, a fight did take place.

He said according to their records, Nkosi completed the GBV forms and was advised to obtain a protection order against Lebese.

“The fight started after they argued with whoever they argued with. She came to complete the gender-based violence forms and left. We advised them to obtain protection orders against each other,” said Mdletshe.

This is not the first time that Lebese has been accused of assault.

The 33-year-old allegedly assaulted his then 22-year-old girlfriend in 2015, damaging her car in Silverton on 8 February, News24 reported at the time.

While Lebese confirmed that he was indeed involved in a fight with his wife on Monday morning, he denied that it became physical.

He also denied that the incident had anything to do with Bongani Zungu.

“We knew that you guys will pick it up. But it is not true that we fought over him, people are making it up because his football career is on another level. The truth is we had an argument outside the club over a phone call that she received, not because of that person,” said Lebese.

When asked about the restraining orders, he said that they resolved the issue and were sitting together as he spoke.

The publication reports that he, however, refused to give her the phone as he said that she was still in a meeting.

Zungu had not responded to questions The South African website sent to him at the time of publishing.