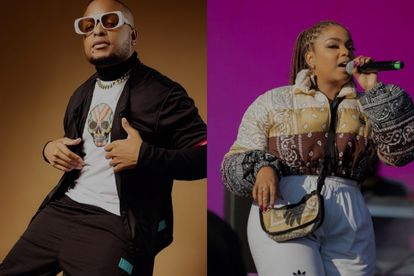 K.O has squashed rumours he is in a relationship with Shekhinah. Image via @mrcashtime, @shekhinahd/Instagram

K.O has squashed rumours he is in a relationship with Shekhinah. Image via @mrcashtime, @shekhinahd/Instagram

Rapper and owner of Skhanda World Ntokozo “K.O” Mdluli is unimpressed after rumours about him being in a relationship with singer Shekhinah have been making the rounds.

The former Teargas member responded to the claims on Twitter, calling out controversial and under-fire social media entertainment commentator Musa Khawula for making the claims.

Musa Khawula is popular for breaking news on Twitter about our local celebrities. Dubbed SA’s Wendy Williams for his shadiness, tweeps are always ready and entertained by his captions.

In the early hours of Monday 2 May, the entertainment commentator alleged that the Supa Dupa rapper and the Suited singer are an item. In his tweet, he claimed that the pair has been spotted looking “cosy” at Altitude beach. He also asked those who see the two musicians together to share a pic or two.

“LIVE UPDATE: Shekhinah and K.O are currently at Altitude Beach and are cozy. It seems like they are dating. If you are there sneak a pic,” Musa alleged.

The tweet was well received by fans who claimed that the pair are “suited for each other” – making reference to Shekhinah’s 2017 hit single Suited. Others also made reference to the former Idols SA contestant’s breakout song Back To The Beach which was released in 2015.

However, K.O took to his Twitter to squash the rumours completely. Mr Cashtime quoted Musa’s tweet as he accused him of lying.

The award-winning hip hop artist explained that although he and Shekhinah have a song together titled Above The Water, they had never met in person before therefore there is “nothing to see”.

“Wow! The audacity to peddle a complete lie, this is so low. I made a song with Shekhinah years ago but last night was actually my very first time meeting her in person at Altitude. That’s all there was, nothing to see here, have a good day.”