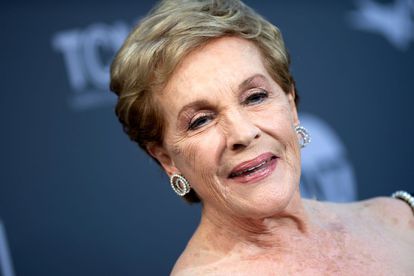 English actress-singer Julie Andrews arrives as she is honoured with the 48th AFI Life Achievement Award during a Gala Tribute at the Dolby theatre in Hollywood, California, 9 June 2022. Image: Valerie Macon / AFP

English actress-singer Julie Andrews arrives as she is honoured with the 48th AFI Life Achievement Award during a Gala Tribute at the Dolby theatre in Hollywood, California, 9 June 2022. Image: Valerie Macon / AFP

Nearly 60 years after preaching virtues of patience and modesty as Mary Poppins and governess Maria, Julie Andrews declared herself “gobsmacked” to have her career honoured at a glitzy Hollywood gala Thursday.

JULIE ANDREWS WAS NOT EXPECTING THIS AWARD

“I didn’t know or think that it would ever come,” the 86-year-old told AFP on the red carpet before receiving the American Film Institute’s life achievement award in Los Angeles, bestowed upon one silver screen legend each year.

“But it’s just as well, because you can’t go around expecting awards and things like that.”

A year after playing the magical and squeaky-clean nanny, and still in her twenties, Andrews sealed a permanent place among Tinseltown’s elite with The Sound of Music.

Five of the actors who played the Von Trapp children – a wealthy Austrian family in need of governess Maria’s singing lessons, and help in evading the Nazis – attended Thursday’s ceremony, along with four of Andrews’ real-life offspring.

Andrews went on to star in a number of films during the 1970s, 1980s and 1990s, with some racy – even topless – scenes, which shocked audiences more used to her straight-laced characters.

In 2000 she was made a Dame by Queen Elizabeth II for services to acting and entertainment.

HOW JULIE ANDREWS EARNED THE SUPPORT OF YOUNGER FANS

Following a personal disaster when her vocal chords were damaged in an operation, Andrews revived her career with The Princess Diaries (2001) and its sequel in 2004.

Her voiceover work as Queen Lillian in the Shrek animated film series, Gru’s mother in the Despicable Me franchise, and Lady Whistledown in the hugely popular Netflix series Bridgerton earned her a new generation of young fans.

Andrews was due to receive the AFI award – billed as “the highest honour for a career in film – in 2020 and again in 2021, but the gala was postponed both times due to the pandemic.

“When they asked me even two-and-a-half years ago – and COVID is what kept us from doing it then – I was gobsmacked,” she said.