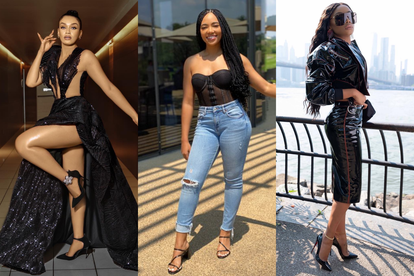 Pearl Thusi has been slammed for supporting Amanda du Pont after she laughed at Bonang who was also abused. Images via Twitter: @pearlthusi/@amandadupont/@bonang

Pearl Thusi has been slammed for supporting Amanda du Pont after she laughed at Bonang who was also abused. Images via Twitter: @pearlthusi/@amandadupont/@bonang

As the news starts to kick in of Jub Jub allegedly raping Amanda du Pont, more celebrities are weighing in. One of the celebrities to share her thoughts on the situation is Pearl Thusi. The actress took to Twitter where she basically bashed South African men for their abusive ways.

This did not sit well with tweeps who reminded her how she stood with abuse-accused Euphonik against Bonang Matheba.

A while ago, Pearl Thusi defended musician Euphonik when he was accused of physically abusing media personality Bonang Matheba. In a tweet, Pearl allegedly referred to Bonang as “hlanyo” which loosely translates to “crazy.”

And now the Queen Sono actress has come out to slam South African men while showing her support for Amanda du Pont who accused Jub Jub of raping her.

“Kuyanyiwa mos today. South African men don’t understand the idea of accountability at all. It’s shocking,” she wrote in a tweet.

This does not bode well with local Twitter users who have wasted no time telling Pearl Thusi where to shove her double standards. Many of them have called her out for ridiculing Bonang but believing Amanda.

She has since received thousands of responses from locals who believe she owes Bonang an apology. A lot of Twitter users also dragged her for generalising South African men.

“Apologise to Bonang. You publicly humiliated her and befriended a man that was harmful to her and even endorsed his stupid t-shirt that was dedicated to harassing a woman that was assaulted by him.”

“Weren’t you supporting Euphonik? You’re a hypocrite sit this one out.”