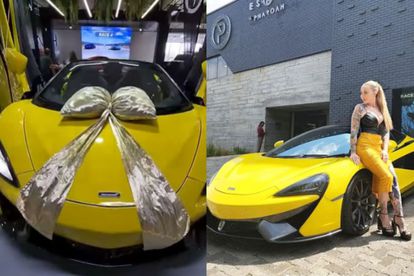 Real Housewives of Johannesburg (RHOD) star Jojo Robinson stunned her 80 000 Instagram on Thursday 22 September after showing off a brand new addition to her garage. The artist and reality television star posted a picture of her new Mclaren 570 S Spider. According to Auto Trader, the high-end sports car is worth a whopping R4 million!

JOJO ROBINSON ADDS A NEW SPORTS CAR TO HER GARAGE

Jojo Robinson joined season two of RHOD earlier this year. She already has a Porsche GT4 which reportedly retails for R1.5 million. On Mother’s Day, her husband, Calven Robinson, spoiled her with a luxury Range Rover.

“Gorgeous. This could be a music video,” wrote one fan.

“What we dream of,” wrote another fan.

‘RHOD’ STAR ON HAVING LIPOSUCTION

In July, Jojo revealed that she has had liposuction and said there was nothing wrong with having surgery.

“I chose to share my journey because too often women pretend to be ‘all natural’ when in fact they aren’t. There is nothing wrong with surgery if that’s what you choose and too often women are left with no one to ask what they do what help or advice from another woman,” she said.

“Because everyone out here ‘knows nothing on the subject.’ I’m all too happy to be honest and share my journey with whoever wants to tag along.”