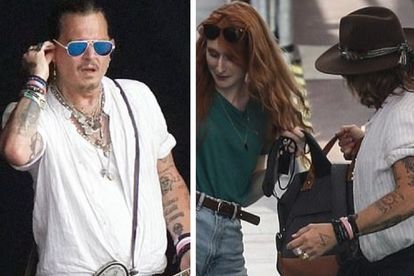 Johnny Depp was spotted with a redhead in Italy. Image via Twitter @bestbug

Johnny Depp was spotted with a redhead in Italy. Image via Twitter @bestbug

Hollywood actor and musician Johnny Depp appears to be living his best life since the high-profile trial against his ex-wife, Amber Heard, and it seems he may have moved on too.

According to TMZ, the Pirates of the Caribean star may have found himself a redhead after he was spotted with one in Italy on Sunday 17 July. The star is in Europe to perform at the Umbria Jazz Festival alongside fellow musician Jeff Beck.

Depp and Beck, who are currently a hot duo, released their collaborative album titled 18 on Friday 15 July. While out gigging and promoting their much-anticipated album, Depp was spotted with a red-haired mystery woman.

None of the images of The Lone Ranger actor and the woman in question show any public displays of affection (PDA), but that’s not to say the pair are not an item — currently, it is not clear.

JUST BUSINESS, NOTHING ELSE

In the past, fans have desperately wanted to see Depp with a woman by his side. During his defamation trial in Virginia, he was linked to his lawyer, Camille Vasquez.

The 37-year-old Californian legal eagle was linked to Depp after a series of hugs and intimate conversations between the pair in court were captured on camera. However, a source quickly shut down those rumours, saying Vasquez is in a serious relationship with a British man who works in real estate.

Weeks later, the appearance of supermodel Kate Moss in her support of her ex-boyfriend during his defamation trial sparked rumours that the flame still burns bright between the former lovers.

Fans were even more convinced that Depp and Moss had rekindled their love when the 59-year-old actor invited her to his performance with Jeff Beck at the Royal Albert in England in May.

ALSO READ: Order in court: Is Johnny Depp ‘flirting’ with one of his lawyers?! [watch]