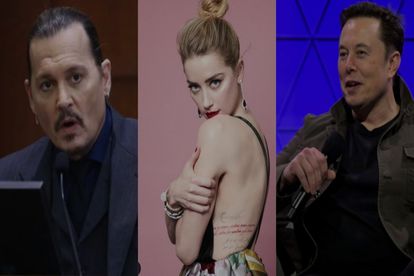 Take a look at how billionaire Elon Musk is linked to Amber Heard and Johnny Depp. Image via @johnny_depp-fan__@amberheard @elonrmusk/Instagram

Take a look at how billionaire Elon Musk is linked to Amber Heard and Johnny Depp. Image via @johnny_depp-fan__@amberheard @elonrmusk/Instagram

The controversial trial sees the former couple battling it out in court due to allegations of abuse they both levelled against each other.

Depp, a three-time Oscar nominee, filed a defamation lawsuit over a 2018 op-ed Heard wrote for the Washington Post about surviving domestic violence. The Pirates of the Caribbean star is suing his ex-wife for implying he was a domestic abuser.

Although the Paranoia actress did not mention his name, he is seeking $50 million (R789.7 million) for defamation of character, saying the allegations cost him everything.

On the other hand, the actress is countersuing, asking for $100 million (R1.5 billion) and claiming she suffered “rampant physical violence and abuse” at his hands.

As the trial continues, reports have emerged that Tesla and SpaceX CEO Elon Musk — who acquired social media platform Twitter this week — could also take to the witness stand. Other witnesses include actors like James Franco,  Ellen Barkin, and Paul Bettany who were likely to be asked to appear.

As per TMZ on 19 March, the world’s richest man will be called as a witness to testify on behalf of Heard. The London Fields actress was romantically involved with the billionaire after her separation from Depp was finalised.

According to The Scottish Sun, Heard and Musk started dating in 2016. In August 2017, it was reported that the businessman ended their year-long relationship. The pair rekindled their love months later, but called it quits once again after a few months.

However, Depp has a different version, as he accused his ex-wife of cheating just one month into their marriage in February 2015.

Disputing the actor’s allegations, a representative for Musk said the relationship only started in 2016, as reported by Vanity Fair.

“A representative for the entrepreneur had denied the allegations and asserted that they had not started seeing each other until May 2016, and even after that it was “infrequent”. Their relationship became romantic until some time later.”