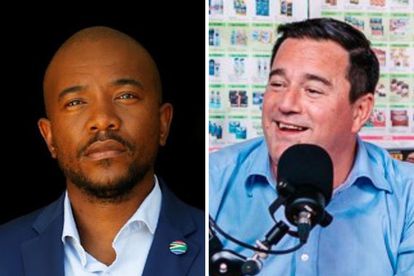 Mmusi Maimane has clapped back at DA’s John Steenhuisen who appeared on Podcast and Chill on Thursday.
Image via Twitter
@mmusimaimane

Mmusi Maimane has clapped back at DA’s John Steenhuisen who appeared on Podcast and Chill on Thursday.
Image via Twitter
@mmusimaimane

Three months after his Podcast and Chill with MacG stint, former DA leader Mmusi Maimane has thrown shade at his successor John Steenhuisen who appeared on the show on Thursday 18 August.

And needless to say, the former political party colleagues had nothing nice to say about each other too!

In a series of tweets, Mmusi Maimane publicly dissed John Steenhuisen, who followed in his footsteps.

“We lead they follow. From podcasts to politics. Siyaba influencer”

“But I can’t teach ’em my swag. You can pay for school but you can’t buy class”.

Mmusi also criticised John Steenhuisen after he controversially referred to his ex-wife as “roadkill”.

Mmusi tweeted: “Always honor the mother of your children. That is Ubuntu”.

John Steenhuisen is currently married to Terry Beaumont, whom he wed in 2014. Before this, he was with wife Julie from 2000 to 2010.

In 2010, the Witness reported that John allegedly engaged in an extra-marital affair with Terry, who was a media liaison officer in KwaZulu-Natal at the time. To make matters worse, Terry was also married to DA provincial director Michael Beaumont during the time of the alleged affair.

Many tweeps called out the DA leader for his “deplorable” comments during Women’s Month.

One tweep said: “You constantly show your true colours DA. During Women’s Month? When it is a well-known fact that he cheated on her? Deplorable and pathetic as a party”.

During the Podcast and Chill episode, Steenhuisen also attempted to “set the record straight” on Maimane’s departure.

He said: “We never got rid of Mmusi Maimane, he resigned on his own accord…it’s his choice.

“He made the decision, I think it was the wrong decision, but it was his to make.”