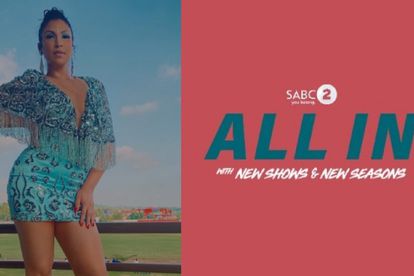 Singer Nizreen has called out SABC 2 for continuously using her voice on their jingle without compensation. Image via Twitter @sabc_2, @officialnizreen/Instagram

Singer Nizreen has called out SABC 2 for continuously using her voice on their jingle without compensation. Image via Twitter @sabc_2, @officialnizreen/Instagram

South African musician Nizreen has called out SABC 2 for not paying her for using her voice on the channel’s popular jingle Where You Belong. The Paradise singer, who tagged the channel on Twitter, claims she has not been paid a renewal fee since 2016.

On Wednesday 20 April, Nizreen took to her Twitter to ask SABC 2 to remove her voice from their jingle. The singer, who is based in Nigeria, explained further in a follow-up tweet when she asked tweeps for help to retweet her post. She expressed that she didn’t think it was fair for the free-to-air channel to continue using her voice because she had not been paid a renewal fee all these years.

“Guys please help. I don’t think it’s fair that they’ve been using my voice for this jingle since 2016 and I haven’t even been paid a renewal fee. When I requested contracts from the production house handling this, they disappeared,” she wrote.

In addtion she highlighted that she is not the composer of the song, but only the vocalist

ALSO READ: SABC given green light to charge DSTV for its free-to-air channels

The singer’s tweet gained a lot of traction as tweeps empathised with and advised her. One tweep who also stepped in to give the Change singer advice is Mynie Grové who is a singer, composer former Afrikaans Idols judge.

In response, Nizreen explained that she kept requesting a contract or any paperwork that stipulated everything regarding usage and renewal, but she was ignored and eventually couldn’t get hold of the channel.

The Ek Verlang Nog Altyd singer encouraged Nizreen to pursue the case further especially if SABC 2 did not follow the CAPASSO rules. CAPASSO is a digital rights licensing agency based in Johannesburg, which collects and distributes royalties to its members i.e music publishers and composers.

“Name & shame, Nizreen. You are owed money if they did not work according to, amongst others, Capasso rules. Share name/s of Producer/s and Studio. You are not the only one. There are many who don’t bother to follow up. Do not let them get away with it. Your voice is YOUR IP,” Grové replied.

In case you’ve forgotten the SABC 2 jingle, listen below: