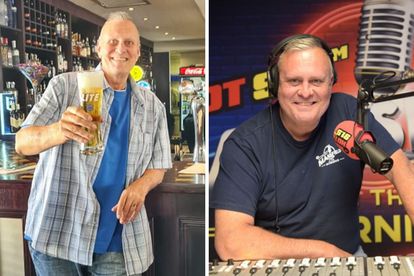 Jeremy Mansfield is mourning the death of his mother, who died on his birthday.
Image via Facebook
@Jem.Mansfield

Jeremy Mansfield is mourning the death of his mother, who died on his birthday.
Image via Facebook
@Jem.Mansfield

Whilst terminally ill Jeremy Mansfield put on a brave face amid birthday celebrations this week, he suffered another somber blow – the death of his mother.

The veteran radio personality recently revealed that he is undergoing palliate care after his liver cancer progressed to stage four.

But just like his birthday, the Primedia star is hoping to make every moment count – both good and bad.

With news of his birthday on Monday 15 August, close friend Samantha Cowen shared an update on how Jeremy Mansfield was spending his special day.

Sharing a pic on Facebook of Jeremy enjoying a glass of beer at a bar, she posted: “This pic was taken on a good day, he is in his happy place, with his happy beer! He asked me to post this to let all of you know that he’s enjoying every minute he can.

Samantha added: “He’s on a lot of medication for pain but he still has a smile and a joke and a beer”.

Today is Jeremy's birthday and he is 59, going on 6! This pic was taken on a good day, he is in his happy place, with…

But hours later, Jeremy Mansfield took to his own Facebook page to share more devastating news – the death of his mother.

The former 702 presenter revealed that he woke up to the news of his mother’s death on his birthday, a day after a surprise party thrown by friends and family.

He shared: “A bit of a whirlwind birthday….Party for about 100 yesterday only to wake up this morning and find out on my real birthday that my mom had passed away at 5am this morning”.

Jeremy Mansfield added that his mother had quite the personality – just like him.  He added: “The sisters at the frail care centre said mom was a legend and they used to love hearing her voice coming down the passage with her walker.

“Up until her last days she knew how to bring a smile to everyone’s face. Rest in peace”.

Despite undergoing immunotherapy a few months ago in his liver cancer battle, Jeremy Mansfield revealed his treatment is now only subject to palliative care.

As such, the dad-of-one has dedicated his “final days” to have “as much fun” as he can.

He shared in an earlier post: “This dream team (as I now refer to them) will now guide me through how to have as much fun in the time I have left and fulfill as many dreams, big and small, I have in my bucket list”.