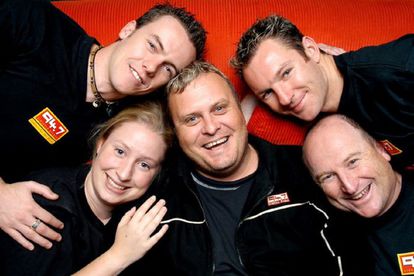 The late radio personality Jeremy Mansfield was known for his “naughty” sense of humour, and often enjoyed playing a good prank. But could he stomach a taste of his own medicine? According to fellow “Rude Awakening” breakfast co-host Darren “Whackhead” Simpson, the answer was no!

In the wake of the veteran star’s death this week, the former 947 personality (formerly Highveld Stereo) shared a clip of a hilarious prank he once played on Jeremy.

Darren “Whackhead” Simpson, who now has a show on KFM, recalled the terrifying experience of pranking Jeremy Mansfield.

The prank took place whilst the duo worked at the “Rude Awakening” breakfast show, which Jeremy helmed.

Having developed a close relationship, Darren knew that Jeremy’s soft spot was with his daughter Gabriella. At the time, Jeremy’s only child was living abroad, but would visit her father in South Africa for one month out of the year.

And according to Jeremy Mansfield, that quality daddy-daughter time was strictly off-limits to others – and so was dating for the teen.

Clearly not fearing for his life, Darren decided to prank his co-host whilst he was out one night and Gabriella was home with the babysitter.

The cheeky radio star took Gabriella to the studio where they called her dad, pretending to be at a nightclub, downing shots. In the background, Darren put his acting skills to the test – slurring his words and poking fun at the livid father.

As expected, during the clip Jeremy went completely berserk, threatening to “beat up” Darren for taking out his daughter, without his permission.

“This was the first and only time I saw this man so angry. It actually scared me”, he said.

Darren added: “I actually played that prank clip at his birthday party this year. He still did not forgive me”.

Listen to the hilarious clip below:

Meanwhile, Jeremy Mansfield was known for playing plenty of pranks on others too.

Take a look at some classic ones below…