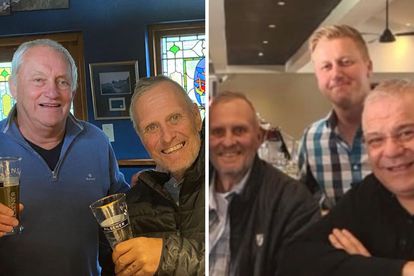 She posted alongside a pic of the bubbly personality:

“This morning a light went out in the world. He died peacefully at home surrounded by family and friends and boundless love.

“Jeremy Mansfield lived large, he didn’t know how to do small. He loved hard, laughed loud, and managed to combine mischief and mayhem with heart and soul. The city was brighter and lighter with him on the airwaves, he changed lives every day. When he wasn’t raising millions for charity, he was raising fresh hell!

“Under a naughty exterior, Jeremy had a huge soft heart. A lot of people got to see and hear that over the radio but he saved his vulnerability for a select few. He was determined that the world be a better and shinier and funnier place and he drove the road to that destination at 1000 miles an hour with no rearview mirror, all of the rest of us clinging on for dear life!

“We will miss him horribly. The family is devastated and is asking for privacy during this time. Right to the end, we were reading him your messages and he was so happy to hear them all, every single one. He knew he was loved and it mattered. He mattered. There will be a new star in the sky tonight”

“As he would have said, Good night bunnies”

This morning a light went out in the world. Jeremy Mansfield passed away just before dawn. He died peacefully at home…

Mark Pilgrim, who is also battling terminal cancer, tweeted: “The radio industry is a family. Today we say goodbye to one of our own. Always remembered. Goodbye, big guy. RIP Jeremy”

CliffCentral founder and former 5FM presenter Gareth Cliff posted of his final encounter with Jeremy Mansfield: “It was lovely to have spent an afternoon, just two months ago, with Jeremy Mansfield. We laughed, shared nostalgic stories, drank and enjoyed each others’ company tremendously. It was a fitting way to say goodbye. Go well, Jeremy, start your radio show in the sky”.

Jacaranda FM presenter Alex Jay tweeted: “He was the undisputed king of Jozi airwaves, making the weekday drive to work something to look forward to. Bold & brash with a heart of gold, he was our fearless team leader. I’ll always remember you fondly, Jem. Condolences to fam & friends. Tsek cancer!”

Radio 702 presenter John Robbie posted: “Hard to believe that Jeremy Mansfield has passed on. ‘Larger than life’ does not do him justice. A totally unique person on and off the radio. Hamba kahle old mate”

Anele Mdoda of 947, tweeted: “Rest in Peace Jeremy Mansfield. The blueprint. The man who paved the path for us in radio. Rest now chap”

Bruce Whitfield, also of 947, shared: “A giant oke has fallen. He was a superhero to me as a kid and I was in awe of his brilliance as an adult. He brought joy, and occasional rage, to millions. Well done Jem”

Metro FM’s Mantsoe Pout Nomzamo tweeted: “Jeremy Mansfield is the reason I wanted to work at 947 growing up. What he did on breakfast radio is still a template for most. He epitomizes what radio can do. Peak greatness, my heart aches for his family, friends, and colleagues. RIP, legend”