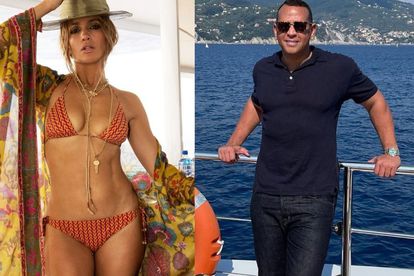 Jennifer Lopez and Alex Rodriguez are both on vacation in France. Images via Instagram @jlo @arod.

Jennifer Lopez and Alex Rodriguez are both on vacation in France. Images via Instagram @jlo @arod.

American singer and actress Jennifer Lopez and her former fiancé Baseball shortstop Alex Rodriguez are both vacationing in the South of France and it’s no coincidence.

JENNIFER AND ALEX IN FRANCE

Jennifer Lopez spent her 52nd birthday with beau Ben Affleck on a R1.9 billion yacht while her ex Alex Rodriguez is also on vacation in the South of France. Here is a look at their vacation pictures. Swipe left for Jennifer Lopez and Ben Affleck’s steamy kiss as they go Instagram official.

“Let the festivities begin,” Rodriguez captioned his Instagram post earlier this week with an ocean view in the background.

SAME PLACE AT THE SAME TIME, NO COINCIDENCE

The formerly engaged couple, who called it quits in March after four years together are both celebrating their birthdays in St Tropez, France. While the Jenny From The Block hitmaker celebrated her 52nd birthday on 24 July, Rodriguez celebrated his 46th birthday on 27 July.

A source tells E! News that the actress and retired MLB player set their sights on the French Riviera some time ago and although they are no longer together, both of them decided to go ahead with their plans. Jennifer Lopez decided to take Ben Affleck along with her.

“Before they broke up, J.Lo and A-Rod had planned a trip together to the French Rivera for her birthday,” revealed the source. “Ultimately, he decided not to change his plans and still go—and she also decided to keep her trip but go with Ben, which is why they’re all there right now,” said the source to E! News.

Ben Affleck and Jennifer Lopez have rekindled their love years after being engaged back in 2002 and going their separate ways in 2004. The pair is said to have packed on the public display of affection while on bae-cation in St Tropez. The pair continued their celebrations into the night as they headed out to the celebrity hotspot L’Opera.

“They held hands, they hugged each other close and they kissed,” the insider describes of their time on the yacht together. “They sailed around from Monaco and went to St. Tropez. Ben and J.Lo spent time laying out on the top deck and making out. They couldn’t get enough of each other,” said a source to E! News.

While Rodriguez is also enjoying his time away. Taking to Instagram he shared a behind-the-scenes video of his 54D fitness session on the boat along with his friends.