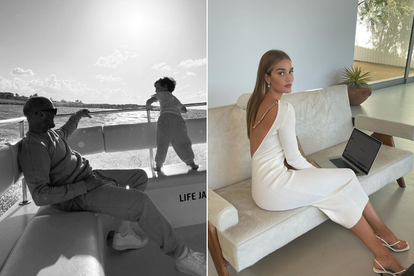 Actor Jason Statham and his model fiancée Rosie Huntington-Whitely are expecting their second child. The model took to her Instagram page to share a snap of herself and her adorable little bump. Naturally, the post blew up as many fans wished them well and took some time to compliment her.

British actor Jason Statham and his beautiful bae Rosie Huntington-Whitely are expecting their second bundle of joy and couldn’t be happier. In true model fashion, the gorgeous mom of one headed to her Instagram to share the news.

The happy couple already has a son and didn’t mention whether this next one is a baby boy or a little girl.

Taking to the social media app on Thursday 19 August, Rosie shared several snaps of herself looking all sorts of stylish while the last snap shows the model in a body-hugging white dress sporting the cutest baby hump ever which she captioned:

Naturally many of her friends and fans were in the comment section sharing congratulatory messages and beautiful compliments:

Meanwhile here’s what the expecting father getting up to

The 54-year-old Transporter star recently filmed Wrath of Man. In this one, Jason a wild-eyed new cash truck security guard is directed by Guy Richie as he (Jason Statham) determinedly avenges his son who was killed very violently.

HindustanTimes reports that Guy Richie paid a lot of attention to the murder scene that he shoots from multiple angles and perspectives, and returns to on several occasions.

Meanwhile Imbd also reports that movie had a massive $40 million budget and was rated 7.2 stars out of 10.