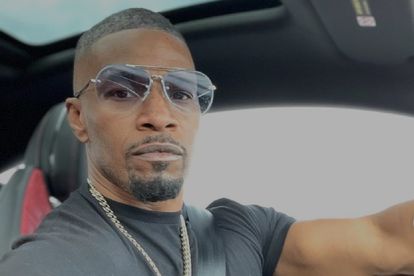 Jamie Foxx and a mystery woman were spotted making out in France. Image via @iamjamiefoxx/Instagram

Jamie Foxx and a mystery woman were spotted making out in France. Image via @iamjamiefoxx/Instagram

American actor, comedian and singer Jamie Foxx is at Cannes for the Film Festival for work , but also some play.

The 54-year-old Sleepless star was spotted on Monday 23 May in the south of France making out with a hot blonde on a yacht and cruising around on a jet ski.

JAMIE FOXX AND HIS BAE ALL LOVED-UP

Several pics of Foxx and a mystery woman packing on the public displays of affection (PDA) as they cuddled up and held each other tight on a luxury yacht have gone viral.

In one picture, the media personality was on top of his girlfriend, who wore a bright red bikini top and black shorts, as she wrapped her arms around him during a smooch.

More pics show the loved-up couple in lifejackets as they got their hearts racing on a jet ski with Foxx at the controls and the woman holding on to him for dear life.

Foxx also shared short snippets of his fun-filled adventures to his Instagram Stories.

In one video, he and his daughter Corrine (with whom he hosts Beat Shazam) enjoyed a night out as they had dinner and relaxed with friends.

“And how do you celebrate? Like this!” Foxx said as he showed off their beautiful ocean view.

According to The Daily Mail, the last time Foxx was seen cruising around on a love boat was with actress Katie Holmes.

The publication reports that Holmes started secretly dating Foxx in 2013, a year after her marriage to Tom Cruise ended.

While Foxx and Homles were reportedly spotted acting rather flirtatiously towards one another, they never publicly addressed their relationship.

The news entity further reports that they finally made their red carpet debut together at the Met Gala in May 2019, but broke up shortly after.

Although Foxx and Holmes fuelled engagement rumours in 2018, the actor has previously stated why he’d never walk down the aisle.

“The 2.5 children, the wood paneling on the station wagon and the cottage, I didn’t think that was for me,” he told E! News’ Daily Pop in October 2021.

The father of two also said: “The pressure of being married, I don’t think we can have a conversation about it. I just keep moving.”