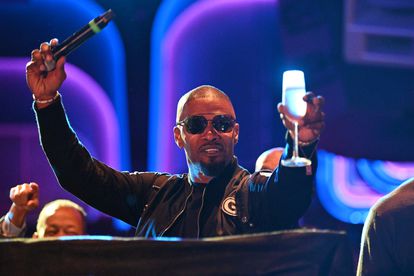 Jamie Foxx has shown off his love and appreciation for local music and dance – amapiano to be precise – and South Africans are impressed!

The Hollywood actor posted a video on social media of him dancing to Daliwonga’s hit track Abo Vele.

In a video posted on his Instagram account, Jamie Foxx was seen in his private jet, sipping on his whisky Brown Sugar Bourbon. The clip is set to Abo Vele, and the 54-year-old -wearing a black tracksuit – is seen busting several moves

“Makes life sweet, even at 40 thousand feet”, read the caption.

South African followers were excited to hear the familiar tunes of amapiano from the local hitmaker.

Here’s what fans said in the comments section.

Richauntwineclub: “It’s the South African Amapiano beats for me”

Gmtshali08: “Wena you are South African”

It’s not the first time Jame Foxx has shown off a move made famous in South Africa. In 2019, the actor posted a video of him doing the gwara gwara – a dance move originally created by Durban muso DJ Bongz.

ALSO READ: ‘One of us’: Kelly Rowland praised over amapiano dance moves [watch]