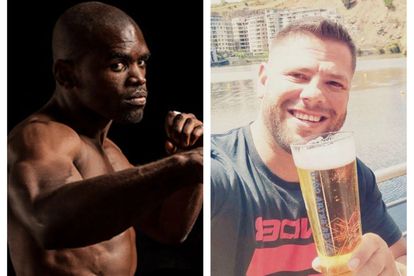 Siv Ngesi and other celebrities have reacted to new of Jaco Swart, who was seen brutally beating his estranged wife in a series of video clips.
Image via Instagram
@super_hooligan33/@sivngesi

Siv Ngesi and other celebrities have reacted to new of Jaco Swart, who was seen brutally beating his estranged wife in a series of video clips.
Image via Instagram
@super_hooligan33/@sivngesi

South Africans – including celebrities – have expressed their outrage at businessman Jaco Swart evading prison, after clips of him brutally beating his wife went viral.

The Gauteng man – who nicknames himself “hooligan” on social media – has been accused of “escaping” the long arm of the law.

THE TRAGIC CASE OF JACO SWART

In clips that went viral on social media, Jaco Swart was seen punching, shoving, slapping and even karate-style kicking his wife Nicoleen at their Johannesburg shop. The footage dates back to 2018.

According to Barry Bateman of AfriForum’s Private Prosecution Unit, Swart was charged in 2021 with assault with the intent to inflict grievous bodily harm.

The man – who has reportedly escaped to Cape Town – pleaded guilty and was sentenced to R20 000 fine and a five-year suspended jail sentence by the Pretoria North Regional Court. This means he will only be imprisoned if he reoffends.

Previously charges levelled against Jaco Swart were struck off the roll last year, according to Barry Bateman. Nicoleen Swart then approached AfriForum for assistance, which saw Jaco Swart face criminal charges once again.

But despite there being graphic video evidence of the attacks – including some in the presence of the couple’s two children – the court dismissed the footage after questioning its “authenticity”.

Following the verdict, Nicoleen said in a statement: “While I’m disappointed at the sentence imposed by the court, I am pleased with the guilty verdict. It sends a strong message to women that they must speak out against gender-based violence, and there is always an ear willing to listen.”

#JacoSwart last year this matter was struck off the roll. Nicoleen and her family approached Afriforum Private Prosecution Unit. Adv. Gerrie Nel made representations to the DPP and the matter was re-enrolled. pic.twitter.com/YdwHBovCS5

On social media, many tweeps expressed their disappointment and disgust with the justice system. Celebs also had their say too.

Siv Ngesi posted on Instagram: “Let’s make Jaco Swart famous for being a wife-beating scum, piece of s**t. Once again the justice system has failed another woman! F**k I just need a few minutes with him so we can JUST ‘talk’! How about the rest of the men doing nothing?”

Black Coffee’s ex-wife and GBV activist Enhle Mbali praised Siv for standing up for all women: “My heart hanks for creating awareness as a man. Naming and shaming as a man”.

Monique Muller – who alleged she was physically abused by ex-partner Katlego Maboe – also used the incident to defend her comments on the Johnny Depp vs Amber Heard verdict. She shared on her IG Stories: “And some of you rely on a court verdict to prove someone’s innocence”.

Here’s what other celebs had to say about Jaco Swart:

Zelda Le Grange: “A R20k fine and suspended sentence? Are we going to wait for him to kill someone? This cannot be the best we do for women”

Minister @RonaldLamola plse. How can we allow this? 3 days ago he did this again. A R20k fine and suspended sentence? Are we going to wait for him to kill someone? This cannot be the best we do for women…. https://t.co/IWNBAg4S4X pic.twitter.com/zNwTrQhbKk