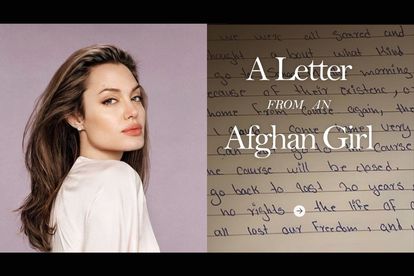 American actress Angelina Jolie joined Instagram for the first time on Friday 20 August when she shared a letter from an Afghan girl amid the takeover of Afghanistan by the Taliban.

‘IT IS SICKENING TO WATCH’ SAYS ANGELINA JOLIE

The Mr and Mrs Smith star made her Instagram debut to advocate for the rights of the people of Afghanistan amid the Taliban’s takeover of the country. The Taliban is known as Deobandi Islamist religious-political movement and military organisation regarded as terrorists.

“Right now, the people of Afghanistan are losing their ability to communicate on social media and to express themselves freely. So I’ve come on Instagram to share their stories and the voices of those across the globe who are fighting for their basic human rights,” wrote Jolie.

“I was on the border of Afghanistan two weeks before 9/11, where I met Afghan refugees who had fled the Taliban. This was twenty years ago. It is sickening to watch Afghans being displaced yet again out of the fear and uncertainty that has gripped their country,” she continued.

“To spend so much time and money, to have blood shed and lives lost only to come to this, is a failure almost impossible to understand,” she added.

The actress also shared a second post in support of the Afghanistan people.

The Eternals star does not seem to be a big fan of social media. However, she has recognised her influence while the people of Afghanistan are losing their ability to express themselves and therefore decided to join Instagram.

“Angie felt compelled to join in a moment when women and young people in Afghanistan are losing the ability to communicate on social media and express themselves freely,” said a source to People.

“From her point of view, if she’s able to be a part of the effort to amplify their voices, then she felt it was reason enough to join and use her platform,” the source added.