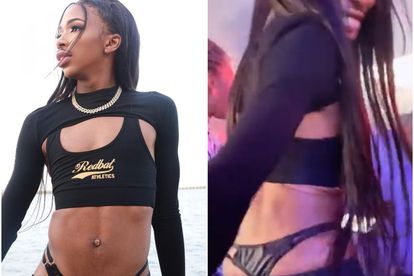 Lasizwe hits back at G-string criticism
Image via Twitter
@lasizwe

Lasizwe hits back at G-string criticism
Image via Twitter
@lasizwe

South African content creator Lasizwe Dambuza is known for his outrageous online behaviour and his ability to turn just about anything into a joke. This is why when he started tweeting about sex and having babies, people were sure that he is only kidding around.

And now many people are convinced that he may have just impregnated someone.

Lasizwe sparks rumours that he is going to be a dad

If you know Lasizwe, then you know he will do or say just about say anything to get some attention. From his crazy videos to his loud opinions, the YouTube star makes sure to produce content that keeps his fans entertained and guessing.

He has once again left many wondering whether or not he’ll soon be joining fatherhood after he tweeted a quite cryptic post about making babies. According to his post, he did not realise that making babies was so easy.

“Making babies shouldn’t be this easy,” he wrote in his post.

Not long ago, Lasizwe wrote about how he would love to impregnate a woman so that he can have a child the biological way and not the scientific way. So naturally, many people assumed that he was hinting that he has easily impregnated a young woman and is quickly on his way to becoming a dad.

“Who did you impregnate?”

While @_exclusiveKat jumped straight to the part where he congratulated Lasizwe on successfully impregnating a woman:

Unfortunately, Lasizwe refrained from confirming or denying the news that he is expecting. One thing we know for sure is that if it is true, he will not be keeping it a secret for very long…

Guess we will all have to stay tuned!