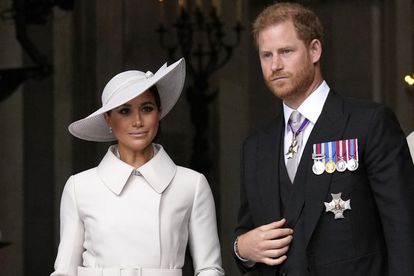 Prince Harry and Meghan leave at the end of the National Service of Thanksgiving for The Queen’s reign at Saint Paul’s Cathedral in London on 3 June 2022. Image: Matt Dunham/AFP.

Prince Harry and Meghan leave at the end of the National Service of Thanksgiving for The Queen’s reign at Saint Paul’s Cathedral in London on 3 June 2022. Image: Matt Dunham/AFP.

Prince Harry and Meghan Markle were recently spotted driving to Oprah Winfrey’s mansion in Montecito, California, where they spent over an hour with the talk show host.

The Daily Mail shared exclusive photos of the former senior members of the British royal family driving towards the talk show host’s house, with a woman believed to be Janina Gavankar in the front seat. A car seat was fastened into the seat beside Meghan in the back, though it’s unclear whether her and Harry’s kids, Archie and Lilibet were present for the ride.

It has been 18 months since the couple sat down with Oprah to discuss ‘Megxit’ and their move from London to California. The interview subsequently went viral and drew a lot of criticism from royal fans and Meghan fans alike. The shocking interview prompted the Queen to make an unusual intervention, stating in a statement that “recollections may vary.”

It’s unclear whether the Duke and Duchess of Sussex went to Oprah’s estate for business or pleasure, and the couple’s representative did not immediately respond to Page Six‘s request for comment. However, the meeting could indicate that Oprah and the royals will be working together again.

In November 2021, the royal expert, Neil Sean claimed sources close to Oprah have already “discussed at great length” the possibility of a second interview with the couple.

The royal expert claimed this was “no doubt to keep a lid on what they thought was a major world coup of an interview”.

The royal expert did however stress his personal doubts that Meghan and Harry would in fact agree to a second interview.

He suggested the pair would be “stewing in their seats” if they subjected themselves to a second grilling.

Keeping a low profile at the platinum jubilee

The visit to Oprah’s house comes less than three weeks after Meghan and Prince Harry visited the UK to take part in the Queen’s Platinum Jubilee celebrations.

According to The Daily Mail, during the short trip to London, the couple kept a low profile but were photographed watching Trooping the Colour from a window overlooking Horse Guards Parade.

They also attended the Platinum Jubilee service of thanksgiving at St. Paul’s Cathedral where they were relegated to seats in the second row behind the Earl and Countess of Wessex.

New projects for the Duke and Duchess of Sussex

It is reported that Prince Harry currently has a tell-all memoir in the works about his life as a royal, though a source told Page Six exclusively that it is not meant to be a “f–k you” to his family amid his fall-out with his father, Prince Charles and brother Prince William.

Prince Harry and Markle have also signed on with Netflix to make an at-home docuseries. Page Six reported that the couple hired Oscar-nominated director Liz Garbus to head up the project.