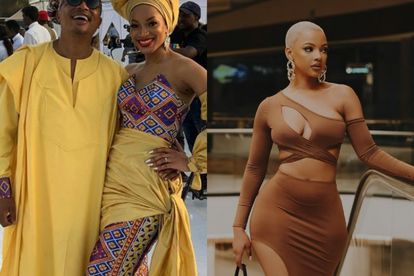 Businessman Leroy Sidambe (left) is rumoured to have left his wife of many years for social media influencer and businesswoman Mihlali Ndamase (right). Image via Twitter @MusaKhawula, @mihlali_n/Instagram

Businessman Leroy Sidambe (left) is rumoured to have left his wife of many years for social media influencer and businesswoman Mihlali Ndamase (right). Image via Twitter @MusaKhawula, @mihlali_n/Instagram

Mihlali Ndamase, who is a social media influencer, YouTuber and businesswoman, is being accused of dating a married man.

The award-winning content creator is rumoured to be dating South African financial specialist, Leeroy Sidambe, who allegedly left his wife Mary Jane Sidambe for the YouTuber.

ALSO READ: ‘He’s in love’: Mihlali gets trolled after Drake tags Uncle Waffles on his IG

According to various bloggers, Mary Jane exposed her husband for allegedly cheating after she found receipts of a purchase he made for the socialite. The receipts are for furniture bought for Mihlali by Leroy at a store called EMK Links. The receipts exposed the influencer’s phone number, physical address and email address.

Sidambe is the CEO of Sakhile Ezweni Group. According to his LinkedIn account, is a qualified security event and project manager who has worked on monumental projects such as late former president Nelson Mandela’s funeral.

MIHLALI GUSHES OVER HER MAN

Twitter user Musa Khawula shared a video that Mihlali allegedly shared with her close friends on Instagram in which she gushes over her boyfriend. In the video, she is heard expressing how happy she is and how much she loves her him, although not mentioning any names.

The make-up artist is also heard asking her close friends for advice as she was conflicted about going to the Cassper vs Naakmusiq boxing match in Suncity or honouring an invite by her man to attend an event which was later revealed to have been Shauwn “MaMkhize” Mkhize’s thanksgiving.

A video posted to Twitter shows Leroy as one of the guests at MaMkhize’s event.

Another short video also shows Mihlali allegedly “arguing with Leroy Sidambe” at a club a few days ago.

MIHLALI’S BEEN ACCUSED OF DATING SOMEONE ELSE’S MAN BEFORE

This isn’t the first time that the beauty is labelled a “homewrecker.”

In May 2021, a woman named Meeshka Joseph took to Twitter to blast Mihlali for allegedly stealing her man. The woman, who did not mention who her man is, later deleted the tweets when she was attacked.

Addressing the allegations months later on an episode of Drink Or Tell The Truth with Lasizwe, she said: “Last time I checked man are human beings who are grown, who can make their own decisions. He is not a sack of potatoes, I have never stolen a man, I don’t know how to steal and that’s my answer.”