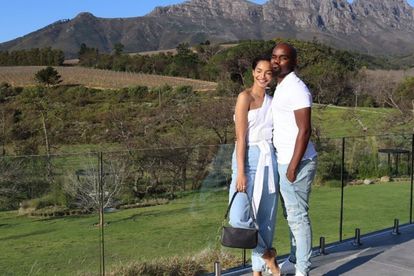 Medical doctor and entertainer Musa Mthombeni and former Miss SA Liesl Laurie are resort hopping for their honeymoon, the couple are now at the Clarendon Fresnaye Hotel in Cape Town, Western Cape.

The cutest couple on the block announced their traditional wedding on social media on Saturday 21 August, which was followed by their honeymoon at Mosaic Lagoon Lodge located on the Hermanus Lagoon and Walker Bay Nature Reserve in the Western Cape. It seems the couple are resort hopping around the scenic Western Cape as they continue their honeymoon on their second adventure.

Liesl, who now officially goes by Liesl Laurie-Mthombeni and Dr Musa have checked into the Clarendon hotel in Bantry Bay, Cape Town. The couple’s stay has unfortunately been accompanied by rainy days, disappointing dear Liesl as she expressed in an Instagram story.

“Cape Town, what is it? Disappoint me again, again, again. Like no, no but hello!,” she says she she shows her 300 000 followers the view from inside her hotel room.

The couple have been making the best of their stay indoors with shopping trips and fine dining. Here is a look.

The couple enjoyed a meal at  Quoin Rock Wine Estate in Stellenbosch, which Liesl calls her “soft life” in the location tag.

“A day out with my wife. Such a weird thing to say. Wowza. Anyways, jolani guys. Kumnandi! This one will forever be my girlfriend. She just deals with medical aids, school fees and other things now!” wrote Mthombeni on Instagram.

Dr Musa Mthombeni also revealed that the couple does not plan on having children for the next three years, when he reposted his wife’s Instagram story of a gift he bought her.

A LOOK AT THE RESORT

According to their website, the Clarendon is not a hotel that shouts, it “whispers rewards, relaxes and enchants”, so Liesl and Musa are in for a treat!

Here is a look at the resort on a sunny day.