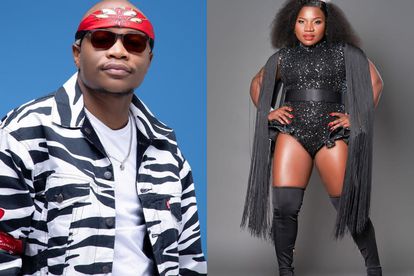 Makhadzi weighs in on her relationship with Master KG. Images via Instagram: @makhadzisa @masterkgsa.

Makhadzi weighs in on her relationship with Master KG. Images via Instagram: @makhadzisa @masterkgsa.

Singer Ndivhudzannyi Ralivhona, popularly known by her stage name, Makhadzi says she and her ex-boyfriend musician Master KG are cool about their break up, via a Facebook live video on Sunday 21 August.

MAKHADZI AND MASTER KG ‘ARE COOL’ AFTER BREAK UP

While Makhadzi has moved on from her relationship with the Jerusalema hitmaker, her fans are still seeking answers as to why they broke up.

During a Facebook live, the singer was asked what happened between her and Master KG and she responded saying that they have decided to be “brother and sister” and they are cool with that.

“What happened between Master KG and I is, we decided to be a brother and sister. We are okay. We are cool. He’s my brother, I’m his sister, we agreed on that,” said Makhadzi.

“Are you fine? Are you okay,” she asks the fan.

Both Master KG and Makhadzi have been reaping the benefits of their hard work. While Master KG has been touring the world, Makhadzi has been building homes. The Ganama hitmaker just built her fourth home, this time for herself after building a separate home for her grandmother, mother and father.

According to Master KG’s Instagram he is now on a Europe tour where he will be performing live at Manchester, London, Dublin this week and Vienna, Madrid and Stockholm next week. In a recent tweet the Shine Your Light hitmaker said he was feeling homesick.

MAKHADZI ON HER ‘JEALOUS’ BOYFRIEND

The singer has moved on from Master KG with a new bae, who she describes as “jealous”. However, Makhadzi did not reveal who her boyfriend is.

“They’re just jealous, they just want to interrupt my live, especially my boyfriend, he is jealous, when I’m live he always wants to call me, I don’t know why,” she said.

“All the time when I’m live he likes interrupting,” she continued.

Although Master KG has not shown any signs of moving on as yet, he was recently rumoured to be dating actress Thuli Phongolo. However, they have both denied the rumours.