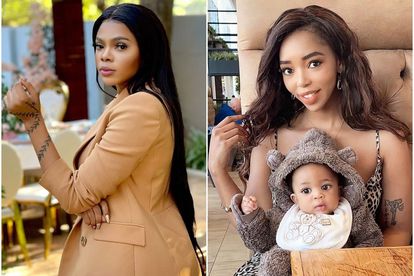 Season three of drama-filled reality show Have Faith has kicked off, and as a result one star is facing the heat: Londie London…

The musician and influencer has been roped into the drama surrounding Kim Kholiwe, the best friend of social media star and “slay queen” Faith Nketsi.

According to reports, Londie and Kim share the same baby daddy; businessman Hlubi Nkosi, whom the latter has accused of “abandoning” their child…

In scenes aired from episode one of the new season of Have Faith, Kim tells viewers that her baby daddy – whose name she does not mention – does not see their 10-month-old son as he has been “banned” by his new wife.

She also claims she heard about their marriage “via the grapevine” as her baby daddy did not tell her he was due to wed.

Tweeps placed pieces of the puzzle together, alleging that Kim was referring to Londie London who also shares a son with Hlubi, whom she quietly married after he paid lobola for her last year.

During the episode, Kim also emotionally reveals she is a “single mom” after being ditched by her baby daddy.

And fans of the show are now making the assumption that Londie London is to blame for Kim’s distress.

“Londie London is evil, she’s the one stopping her husband from taking care of his child(Kim’s child) wow

Another added: “How do you make your husband choose between your marriage and his kid. She’s not comfortable with him being with his son?”.

A third said: “Wives won’t see heaven with this thing of denying husbands to take care of their kids financially (that are outside of the wedlock)

One tweep claimed that Kim was also hurting because Londie London “stole” her life.

They posted: “So Londie London is living the life that Kim thought she’ll live…be married to a rich man, have children and live a happy life together

ALSO READ: Faith Nketsi is back in the studio but tweeps are unimpressed… [watch]

Meanwhile, Londie London is rumoured to be joining season two of another reality show: Real Housewives of Durban.

The star is allegedly replacing Ayanda Ncwane who revealed she would be leaving the show as it “focused too much” on the death of her husband S’fisiso Ncwane.