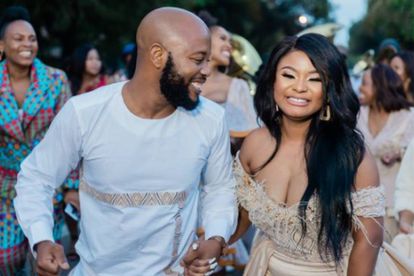 Mjolo Ke Scam actress Amo Chidi, who played the role of Reneilwe in Rhythm City is officially off the market.

Amo Chidi secretly married the love of her life, Lebo, who is also the father of her child last month (27 November).

“Our beautiful wedding day!!! My best friend and I are finally married!!! Allow me to reintroduce myself! I’m officially Mrs N,” she posted.

It is unclear who her husband is as she hides his identity and lives a private life on social media.

She also thanked her friends and family for the unwavering support and love that they showed her on her big day.

“Thank you to my dearest friends and family for celebrating with us and for all the well wishes!! We did it!”.

HER EXIT FROM ‘RHYTHM CITY’

Amo Chidi gained popularity on Rhythm city, as a bubbly high scholar who transitioned into a singer called Reneilwe.

She announced her exit from the now canned e.tv soapie a year before the channel replaced it with House of Zwide.

She left the popular soapie in early 2020 with her co-star, Samkelo Ndlovu who played the role of Lerato.

“On behalf of the Rhythm City team, we would like to wish Samkelo and Amo all the best for their future. “

“We will value their personification of the roles they played on the show and thank them for their dedication to entertaining the audiences.”

“Thank you for being a part of the family.”

HER ROLE IN ‘MJOLO KE SCAM’

The mother of one took to social media this past July to share the news that she’ll be starring in her first comedy film titled Mjolo Ke Scam.

The Mzansi Magic film aired on 31 July and featured Isibaya actor Zakhele Mabasa who played the role of Skhaleni for eight seasons.

Rhythm City got canned in November 2020 and got replaced by the fashion drama House of Zwide on Monday, July 19.

The show surpassed all expectations with its premiere on 19 July when it pulled a mind-blowing 4.24 million viewers.

The soapie is still the second most-watched show on e.tv after Scandal! followed by Imbewu: The Seed.