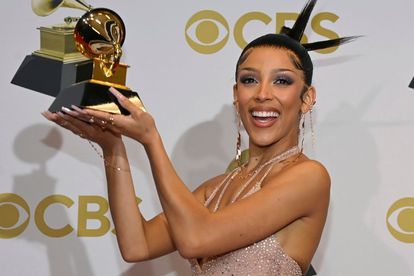 Amala Ratna Zandile Dlamini aka Doja Cat was nominated for eight awards at the 64th annual Grammy Awards. The rapper, singer and songwriter won the Best Pop Duo/Group Performance Award with SZA for her single, Kiss Me More.

South Africans took the opportunity to celebrate another “local artist” for bagging Grammy. Doja Cat is the daughter of veteran actor Dumisani “Chester” Dlamini who is best known for his role in the iconic 1992 film, Sarafina!

Doja Cat’s win for her chart-topping single Kiss Me More featuring SZA was announced by Avril Lavigne. When her name was announced, Doja Cat was taking a quick bathroom break, so SZA walked up on stage using crutches with Lady Gaga’s assistance.

When Doja Cat took the stage, the 26-year-old singer said: “I have never taken such a fast piss in my whole life.”

“I like to downplay a lot of sh*t. But this is a big deal,” she said while tearing up.

“Thank you everybody, be safe. Take care.”

Taking to Twitter, South African tweeps questioned if they should celebrate the American muso’s win as her father is South African, but there were mixed reactions…

“Does this count as another win for South Africa?” asked one tweep.

“The narrative South Africans have about Doja Cat is so annoying. She is not ours to claim!”

ALSO READ: ‘You anchor me’: Black Coffee dedicates Grammy win to his children

DOJA CAT ON BEING HALF SOUTH AFRICAN

Taking to Twitter on 25 September 2021, Doja Cat spoke about being half South African. Through her tweet, she hoped to spread awareness about the hunger crises in Africa.

“Some of my fans may not know this… I’m half South African, specifically Durban, South Africa and the continent of Africa is experiencing a devasting hunger crisis.”

“It’s heartbreaking to know that the COVID-19 pandemic has left 41 million people on the brink of starvation.”