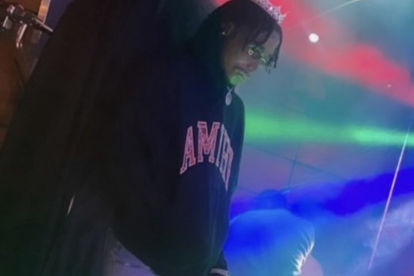 Social media users have been left outraged by photos of late US rapper Markelle Morrow aka Goonew’s dead body at his funeral which took place at a DC nightclub. In the images which have gone viral online, the young rapper’s embalmed body can be seen placed upright on the stage at the club while mourners party and dance around it.

While many found it disturbing, others thought it was an ideal send-off for the rapper who enjoyed the nightlife and club scene.

Many people have been left speechless after seeing photos of 24-year-old Goonew’s embalmed body on a stage at his funeral which took place at a nightclub called club Bliss in Washington DC.

The funeral that took place on 3 April this year was dubbed The Final Show. Mourners were allegedly charged a $40 (around R581) entrance fee.

In various photos and videos which have emerged online from the “funeral” the body is seen wearing a designer hoody, gold chains, and has a crown on his head.

Meanwhile, off the stage, mourners were seen dancing and drinking while others appeared to be shocked at the presence of the body.

After the photos sparked outrage, the management of Bliss nightclub released a statement on Instagram saying that they were unaware of the family’s plans to have the body present at the unusual send-off.

“Bliss was contacted by a local funeral home to rent out our venue for Goonew’s home-going celebration,” the message read. “Bliss was never made aware of what would transpire. We sincerely apologize to all those who may be upset or offended.

“Please keep Goonew’s family and friends in your prayers at this difficult time.”

The Daily Mail reports that the rapper was shot dead on 18 March this year in the 3400 block of Walters Lane in the District Heights neighborhood.

His mother, Patrice Parker Morrow, confirmed that her son was shot in the back during a robbery and a large bejeweled pendant he always wore was stolen, reported NBC4.

ALSO READ: Goldilocks is that you? Rapper has gold chains implanted into his scalp