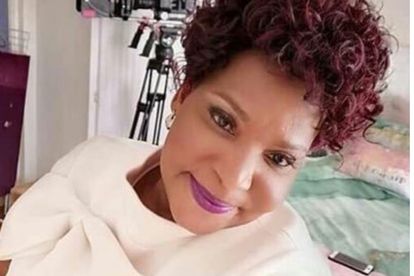 Gomora actress Sannah Mchunu who plays the role of Zodwa opened up about how her divorce was a blessing in disguise and how her failed marriage boosted her career .

Mchunu who is popularly known for her loud and problematic characters as Nomarashiya on Muvhango, Zodwa on Gomora, and Machiliza on Rhythm City told the listeners on Jozi FM that she is thankful for being a divorcee.

The actress says she became a mother of five children at the age of 21-years and doesn’t have a matric certificate.

She also encouraged women to leave relationships that no longer serve them, put themselves first and focus on their careers.

Mchunu also advised young women to not make similar mistakes she made in her youth. The actress also stated that she had to leave her children with their father so that she can make a life for herself.

One of my friends, who is a singer, had asked me to accompany her to auditions.

On our way, she decided to start at Kalawa Jazmee. She then asked me to go to the auditions and stand in the queue for her.

Unfortunately, she did not arrive at the auditions as she was stuck at Kalawa. I was then convinced to audition. Fortunately, I got the role.

Since that day, I’ve never looked back.

The actress also explained how her role on Gomora was extended by producers because of her impressive performance.

The character was supposed to be temporal, but I made sure that I excelled.

The brief was, Zodwa is an irresponsible and drunkard woman, and her baby is to be taken.

Gomora actress Katlego Danke who plays the role of Thati on the show said her fans still call her Dineo Mashaba from her Generations role despite her extensive role-playing on various soapies such as Backstage, and Isidingo.

The actress shared this on Power FM yesterday and says she is not offended:

They are so intimately involved with the character that they feel that they know you.

Her former on-screen husband Seputla Sebogodi who played the role of Kenneth Mashaba surprised the actress on air yesterday while she was presenting on Power Fm.

Dinnyyy…My beautiful wife. No short skirt, don’t look at men and only drink what I’m telling you to drink.

I just want to say may God shower you with blessings from above – straight from heaven to you. Keep doing a good job.