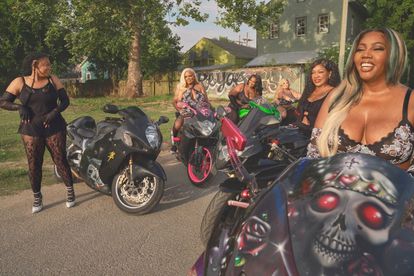 Last week, Rihanna’s billionaire status was made official by Forbes. The musician and Fenty founder is now worth $1.7 billion (about R24.4 billion), making her the wealthiest female musician in the world and second only to Oprah Winfrey as the richest female entertainer.

According to Billboard, paparazzi questioned her on being a “self-made billionaire” when exiting a New York nightclub and her answer — “God is Good” — is way more humble than fellow billionaire Kanye West’s declaration that he’s still “being undervalued”!

A post shared by SAVAGE X FENTY BY RIHANNA (@savagexfenty)

The campaign sees The Caramel Curves wearing an array of Savage X Fenty lingerie, including fishnets, silky gloves, floral bras and finished off with high heels to add to the sex appeal of the collection.

The motorcycle crew were photographed by Shaniqwa Jarvis in their native New Orleans on their various performance bikes.

“The Caramel Curves show the world what being a badass boss is all about, while bringing sexiness along for the ride,” Rihanna told Vogue.

The Vogue article goes into detail about The Caramel Curves’ campaign with Rihanna’s fashion label and how they’ve been criticised for riding in heels.

“This is our look. When you come in, be prepared to look this way. You’re gonna have to wear heels, sexy clothes, be cute. Get it together. We don’t want to look regular.’ I’m never going to look regular,” said Nakosha Smith who co-founded the Caramel Curves in 2005.

Just like Rihanna’s brand in the lingerie industry, The Caramel Curves stand out in the biker community that’s dominated by men. The group also make sure to stand out in the way they dress, as well as the precautions they take when riding their motorcycles.

The 33-year-old pop star has been living her best life in New York since she’s been dating rapper A$AP Rocky. The stylish duo was spotted shooting a video in the Bronx, New York, in early July.

It wasn’t clear whether the video is for A$AP Rocky or Rihanna who hasn’t released any new music since 2016’s ANTI.