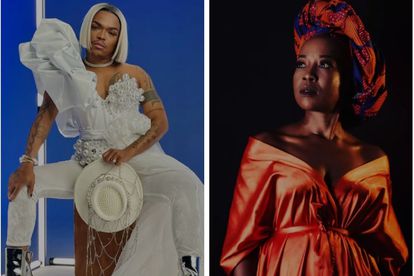 Ntsiki Mazwai has offended the LGBTQI+ community with her controversial utterances following her jabs that were directed at Somizi Mhlongo. Image via @miss_ntsiki_mazwai, @somizi/Instagram

Ntsiki Mazwai has offended the LGBTQI+ community with her controversial utterances following her jabs that were directed at Somizi Mhlongo. Image via @miss_ntsiki_mazwai, @somizi/Instagram

Poet-turned-podcaster Ntsiki Mazwai has been trending all day on Twitter for her controversial utterances.

Following a clip of Somizi and fellow Idols SA judge Thembi Seete’s argument on Sunday’s episode of the singing competition, Ntsiki took a swipe at the Sarafina star and then the LGBTQI+ community.

Ntsiki is known to speak her mind about anyone, whenever and wherever. This is what she did when a clip of Somizi’s catfight with Thembi went viral.

In the clip, Somizi and Thembi can be heard raising their voices at each other. The reality TV star is heard telling Thembi that she keeps making the same mistake and continues to talk over him. He also tells her that he’s been a judge on the show for eight years now while she’s a newbie.

But the Gomora actress did not seem to back down and made it known that she’s not a guest, so he cannot bully her.

Giving her opinion about the altercation, which many viewers believe is staged, Ntsiki said:

“Somizi has ALWAYS been jealous of alpha females….. Always.”

‘SOMIZI IS A CONVICTED SEXUAL OFFENDER’

“It wasn’t staged…. It happened off air and the 0roduxtion decided to use it for ratings and drama because they are not doing well after hiring a convicted sex offender.

“Somizi is a convicted sex offender… He paid a fine. He was even arrogant in court. He is a sex offender. He is on the list that president said would be made public…” she added.

According to SowetanLIVE, Somizi was found guilty of indecent assault and was sentenced to four months imprisonment or a R6000 fine. Half of the sentence was suspended for three years.

Despite Somizi recently coming as pansexual and not gay, Ntsiki attacked gay men specifically as she continued to call out the Idols SA judge for his action.

“Being a gay man does not qualify you to be a woman….Youre a gay man…… That’s that. Please stop trying to erase us.

“Youre finished taking all the male privileges now you want ours… Gtfoh [get the f**k out of here]” she said.

In addition, she expressed that gay men who compete with women are toxic. She then called out the LGBTQI+ community for coddling Somizi.

“The main problem with the lgbqti community is their inability to call out their own bullshit,” Ntsiki lashed out.