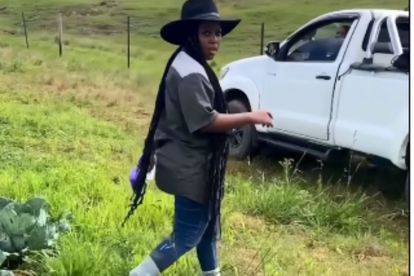 Actress Thandeka Qwabe – who is known for playing Thandi in Mzansi Magic’s canned telenovela – Isibaya – has gone back to farming.

Alo read: ‘Isibaya’, ‘Rhythm City’… soapies and telenovelas that got canned in 2021

Seasoned actress Thandeka Qwabe – who got her big break in Isibaya as Thandi has left the limelight to become a farmer.

This is after Mzansi Magic cancelled the multi-award-winning telenovela after eight seasons.

The actress told Sowetan that she is grateful that her parents can always catch her when she falls.

“The conversation I had with them was that this is a big lesson and if anything should happen to them, who is going to catch me?

“I found myself not in a good space, where I was sad and depressed.”

“I had to make the decision to move back home because being in Joburg didn’t make financial sense. “

INSIDE HER ROLE AS THANDI

The publication reported that Thandeka Qwabe’s world came crashing down when she realised she is unemployed.

Qwabe says Isibaya had given her a big break as Thandi in 2017.

The actress’s character Thandi was madly in love with Bhekumuzi played by Scandal! actor Melusi Mbele.

She’d just graduated from varsity and wasn’t up for auditioning again after the show got canned.

She recently shared on social media that her year was filled with challenges.

The actress also added that there is no growth without change and thanked God for the journey.

“Hebrews 11:1- Thank you to everyone who has supported me throughout this journey.”

Also read:This is what’s next for Nomzamo Mbatha after ‘Isibaya’ exit