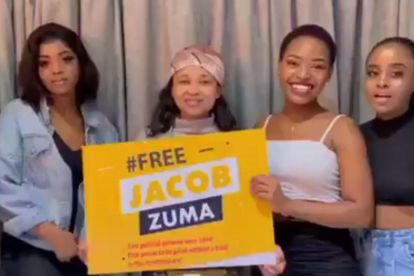 Since the incarnation of Jacob Zuma, a number of social media users and celebrities have shown their support for the former president.

As tensions rise in South Africa Zuma’s children, including Duduzane, have showed their support for him but some social media users are questioning if some of his children are related to him at all!

One of the five women, thank South Africans for supporting “their father” while the other four stand next to her.

“South African people, thank you so much for standing up for our father Jacob Zuma. We love you so much!”

The video was posted by a Twitter user on 11 July and got plenty of attention from other users of the blue bird app.

One Twitter user asked if the five women are indeed Jacob Zuma’s children saying that the person who posted the video wouldn’t want to be accused of spreading fake news.

“Are they his kids or they are just saying it like most people say uBaba? You wouldn’t want to be spreading fake news Prof. . .!?!. “.

Another Twitter user expressed that they felt the women’s tone of English would be similar to that of their older brother Duduzane Zuma.

A tweep responded to the comment writing, “Zuma had babies with everybody, from classy working class women to royal princesses, from his friends’ kids to any other woman that just possesses a vagina. Don’t expect all of the kids to be polished.”

As far as South Africans know, former president Jacob Zuma has 23 children. He has previously said that he is proud of all his children and is open about his polygamy. In a headcount done by Parent24, they had done an unofficial count of the Zuma clan but not much is known about some of his children.